Will of George Lawson

No Profile Manager [adopt this profile]
This page has been accessed 30 times.

This profile is part of the Lawson Name Study.

My body to be buried in the quire at Washington, over against my grandfather's tomb, where I will, that my son Thomas shall cause a window and a tomb to be built, and he to bestow 201. or 101., at his discretion.

I give to the maintenance of a grammar school in Hexham 201.

I will that Mr. Claxton his son's annuities be perfected, according to the drawghte thereof made.

To Mrs. Claxton, wife to the said Roberte, 101., to be paid into her own hands, and to be employed to her own use, and her husband not to know of it.

I will that if my brother William Whithed,[3] can procure, at the hands of the dean and chapter of Durham, the lease of Merington water milne, by Mr. Rauff Bowes his means, or otherwise, that William More,[4] shall have the same lease, paying, out of his portion, such sum of money, as shall be disbursed, for the obtaining of it.

To my brother, Gilfourd Lawson, all my estate, right, term of years &c., which I have in my lease of the tithe corne of Sudwick.

To William,[5] son of my brother Gilfourd Lawson, an annuity of 101., to be paid out of my lands, after the death of Elizabeth Lawson, my mother.[6]

To my son Thomas my lease of Barmstone, he paying unto his four brethren, Robert, George, Rauff and Edward Lawson, to every of them 1001., and to his sisters, Elizabeth,[7] and Katherine,[8] Lawson, to either of them 3001.

To two of the poorest scholars in Houghton school, which shall continue there, so long as the said school is maintained, 40s. yearly, out of my lands in the said parish, to be given at the discretion of the church wardens and school-master, to by the said scholars books and apparel.

I will that the money that I am owing unto my uncle George Lawson his children shall be paid.

Wheras Doctor Bellamie doth owe me 121. 10s., I will that he shall not pay it, until he be very well able to pay it, and if he be not very well able, that then he shall never pay it.

I will that my mother Elizabeth Lawson have the fishing at Barmston, for her life, and further I give unto her my xij silver spoons, called the xij apostells, which my wife Mabell has in her custody, and also the silver goblet I had given by widow Kirkhouse.

To my son Thomas my two silver canes.

To my uncle, William Lawson, one old riall.

To my aunt Harbottlet one old riall, and to everyone of her children 10s.

To everyone of my sisters one old riall, and to every one of their children 10s.

To my cousin Rauff Lawson, of Brugh, my best horse, and to his daughter Alice my baie stoned stagg.

To my cousin William Lawson, of Rock, my gray gelding, which is at Winyard.

To my cousin, Margaret Claxton, my baie nag, at Wynyarde.

To my brother Gilfourd my black stoned horse, and my gray nage.

To Umfrey, son of Roberte Claxton, my dune colte.

To George Lawson, of Sheles, my gray nag, which I bought in Allstone more.

To William Lawson, his wife, of Sheles, 40s.

To every man servant in Litle Usworth 10s., and to every made servant 6s. 8d.

To William Walton, Rauffe Brian and Richard Dobson, to every of them 10s.

To William Storye a cowe.

I will that my son Thomas shall be as good to my servants Thomas Bowman, William Storie and George Allen, in preferring of them, as I was to Lionell Martin, they serving for it, and deserving it.

I will that a cow of mine in widow Chamber's hands, of Gateside, shall be sold, and the money distributed to the poor of Gateshed.

And lastly I give unto the poor of Houghton, Bouldon, St. Oswolde's, in Durham, and Washington parishes, 131. 6s. 8d., to be divided equally among them.

All the rest of my goods &c., to Thomas Lawson, my son, whom I make sole executor, and if he refuse, then my sons Roberte and George to be my executors. Witnesses, Gylfourd Lawson, William Whithed, George Allen and Humfre Siddon. 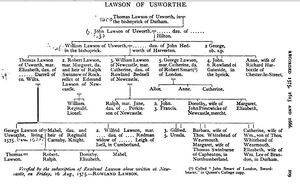