[send private message]
This page has been accessed 279 times.
This Study has been included in the One Place Studies Project.

Wombwell is a town that today is, located in the Metropolitan Brough of Barnsley in South Yorkshire, England

Historically it was in the West Riding of Yorkshire and the township included Broomhill, Jump, Lundhill, Hemingfield, and Smithley.

Wombwell dates back to pre-Norman times and at the time of the Domesday Survey of the Normans it was a was a small agricultural village known as Wambella - the place of the well. It is known that the area around Wombwell saw many desperate battles during both the War of the Roses and the English Civil War but there is no record of skirmishes actually in Wombwell. The 19th century saw a rise of Wombwell as an industrialised community and whilst coal was mined in the area from the 15th century it was not until the late 17th that the industry became important. After 1800, coal mining became vital to the area and more and more mines were opened in the Wombwell area to exploit the rich Barnsley Coal Seam. As the industrial life of the area increased, so did the population. An explosion, killing 198 men, occurred at Lundhill Colliery in 1857.

The parish church, St Mary's, located on Church Street, is a Grade II listed building. A history can be found at History of St Mary’s Church Wombwell. Wombwell became a parish in its own right in 1863 and prior to that the Rector had also been Vicar of Darfield and its Church records were kept by Darfield. Wombwell’s first church register commenced in 1867 but the first recorded baptisms and marriages were in 1864

The 1914-1918 war memorial was erected in front of the church. This memorial later had the 1939-45 names added. More information can be found at Wombwell War Memorial. Wombwell Park was opened following WW1 and dedicated to the memory of the Wombwell Men who lost their lives in this conflict.

There is also a Memorial to the Wombwell men who served in the Boer War. It is located at the side of the town hall.

Wombwell has one main cemetery, which is tended to by a voluntary group named the Friends of Wombwell Cemetery. The cemetery houses two chapels that are Grade II listed buildings: one of which was destroyed by fire, and was transformed into an outdoor "Peace Garden.; The other has been renovated and is now a "Community Hub". 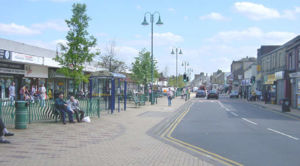