[send private message]
This page has been accessed 3,462 times.

When the story hit the wire services, it appeared in newspapers all over the United States and Canada.

The press had a field day with the story! The newspaper editors deliberately set out to hook the reader with sensational headlines that screamed controversy and catastrophe. Some of the headlines were exaggerated to the point of fabrication.

Below are just some of the actual headlines from the stories that appeared in newspapers across the country:

When the Attorney General’s opinion came out I immediately went to the Governor’s office in the State House. The Governor was not in his office and I was given an appointment for another day.

Upon arrival for my appointment, I told his staff that I was the teenage judge that the Governor had recently appointed. Within minutes a staff member said, "Judge Griffin, the Governor will see you now." I think that was the first time anyone had called me "Judge Griffin" and I liked the sound of it.

I told Governor Bowen that I had reviewed the opinion and that it raised a substantial question about my authority of office. I let him know that I fully appreciated the honor bestowed upon me by the county commissioners' recommendation and by his appointment to that office.

However, I explained, considering the sensational headlines in the state and national press, I did not want to cause any political embarrassment for him or the county commissioners. Additionally, I stated that I had a duty that the office of Justice of the Peace is held in high esteem by the public. Accordingly, I informed him that in full respect for the County Commissioners and the Governor I was there to tender my resignation for his consideration and action.

The Governor asked me if I was willing to fight the opinion in court should it come to that and I responded in the affirmative. He told me that he would not accept my offer to resign and surrender my Commission. He advised me to return to Johnson County and get my courtroom open and ready for court business. I reported back to the County Commissioners with the details of my meeting with the Governor and started work with the township trustee in getting my office and courtroom open.

Opponent's Lawsuit Against the Election Board

Opponent's Lawsuit Adds Justice of the Peace to Lawsuit

Court Decision on Eligibility to Serve

I had been studying Indiana statutory law in my spare time while in high school.[2][3] In January 1974, I graduated early from high school. I had a lot of time on my hands so I started to inquire about a Justice of the Peace for White River Township, a position I had discovered in my studies. County officials and area politicians incorrectly told me that there had never been a Justice of the Peace in White River Township. They asked me how could I intend to fill a vacancy of office when there never was a J.P. in White River Township. I explained that the law provided for one and that nobody had ever bothered to run for the office in the past 50 years. I further explained that this was a common occurrence in certain townships around the state starting in the early part of the 20th century.

Newspaper accounts and old state statutes tell us that there were two Justices of the Peace elected in White River Township every four years in the 19th century. Archibald Glenn was the first Justice of the Peace in White River Township having been elected at the first county election in 1823,[4] the year Johnson County was formed. Abraham Lowe was the other initial J.P.[5]

There were several men who served as the J.P. in White River Township after them including John Bennett, Alfred Boaz and Daniel Dorrell. Prior to me being elected 60 years later, the last J.P. to be elected in White River Township was in 1914. While some of the candidates in 1914 are known,[6], I do not know who was ultimately elected that year.

Thus, there was a vacancy of office from the late 1910s until I was appointed in 1974 to fill the vacancy. The vacancy I filled was for a term that expired 31 December 1974. Accordingly, I had to run for office in 1974 to succeed my appointive term. I was the last Justice of the Peace in White River Township to serve because the Indiana General Assembly eliminated the office statewide as of the end of 1975, only one year into the four year term in which I was elected.[7]

All of the newspaper clippings, except one, were obtained using my subscription to Newspapers.com. I highly recommend this service. 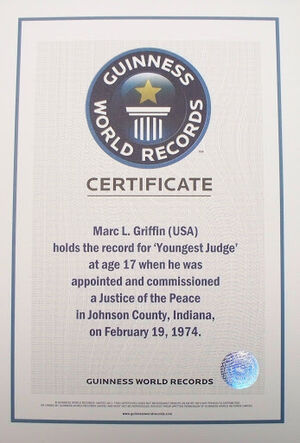 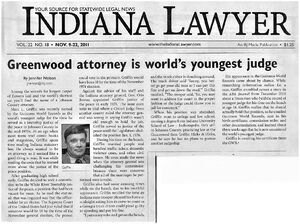 Commission from Governor as Justice of the Peace 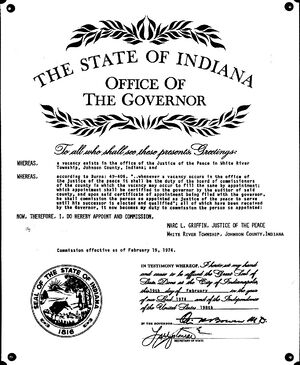