Daniel Sparks was born in England.

Born Abt 1568 of , Hampshire, England, United Kingdom Find all individuals with events at this location Died 12 Dec 1633 of , , England

About Sir Thomas Wright. Thomas Wright, son of Robert and Mary (Green) Wright, resided at Brook Hall or "The Moat House" in South Weald, Essex, England. He married Roberdge or Rabidge Pake. He was buried 17 Nov 1603 and his wife was buried 21 October 1617. They were the parents of eleven children Came to live at Brook Hall at the death of his father. Hall was renamed The Moat House by agreement between John and Thomas Wright. Sources. from Genealogical and memorial history of the state of New Jersey, Vol 1. edited by Francis Bazley Lee. New York: Lewis Historical Publishing Company, 1910, p. 224. Born in Essex , England in 1548 / died in 1617 in the same. [1]

The Origin of the Name Sparks by: Dr. Russell E. Bidlack

Authorities are agreed that the name Sparks has derived from the name Sparrowhawk, a nickname which was used in England long before the coming of William the Conqueror. It is not believed, however, that the name Sparrowhawk became a family name until the 13th century. The earliest person on record who was called Sparrowhawk was an Anglo-Saxon monk of St. Edmundsbury who became Abbot in Abingdon in the year 1048. The story of how Spearhafoc (as the name was spelled in Anglo-Saxon) was given the bishopric of London by Edward the Confessor in 1050 but was never consecrated because of the opposition of the Pope and the Archbishop of Canterbury, is found in the Anglo-Saxon Chronicle.

In the Doomsday Book (the record of a great survey of the lands of England made between 1085 and 1086 by order of William the Conqueror) the names Sparhauoc and Sperhavoc (both intended for Sparrowhawk) appear among the landowners who had possessed land at the time of Edward the Confessor.

The sparrow hawk has been a common bird in England for many centuries. Probably dozens of other persons were also nicknamed Sparrowhawk, of whom no record has survived. The sparrow hawk is really a small falcon, eleven to twelve inches long, and was used extensively in the ancient sport of falconry, where hawks were trained to attack other birds and carry them back to their masters. It is described in the Encyclopedia Americana as a very bold and active bird, and not infrequently may be seen to attack other and larger birds of prey, its courage extending even to recklessness, while it is also shy and wary.

More records on Daniel Sparks may be available offline. Schedule a free consultation with our friends at Trace.

ask our community of genealogists a question.
Sponsored Search by Ancestry.com
DNA
No known carriers of Daniel's DNA have taken a DNA test. 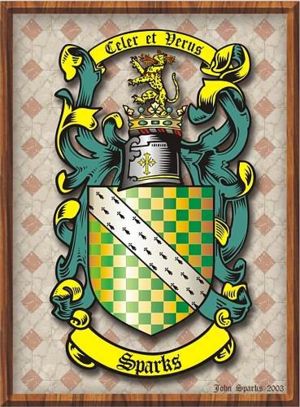 Daniel is 15 degrees from Alice Paul, 19 degrees from Michael Schell and 10 degrees from Henry VIII of England on our single family tree. Login to find your connection.