Marriage in the State of Georgia, Hall County, say's To any Minister of the Gospel, Judge of Superior Court, or Justice of the Peace to Celebrate : You are hereby authorized and permitted to Join in the Honorable State of Matrimony, W.B Spearman and Martha Huff 13th day of December 1875


Memories: 4
Enter a personal reminiscence or story.
Donnie Blackstone
Look and see how this Spearman is related?

The graveside service will be 11:00 am, Friday, June 20, 2014, at Lakeview Memory Gardens, York, SC with the Rev. Ken Lane and Rev. Greg Spearman officiating.

Mr. Spearman was born January 24, 1926 in Inman, SC to the late Samuel David Spearman and Lillie Belle Lowe Spearman. He retired from Celanese in Rock Hill after 33 years of service and was a US Army, WWII veteran.

He was preceded in death by four brothers: Dean, Trent, Charles, and Norris Spearman.

posted 4 Feb 2019 by Donnie Blackstone   [thank Donnie]
Donnie Blackstone
Found this information about William Spearman's on Fold3 from the 1860 US Federal Census. This also includes his father, brother and another family member not sure of the relationship.

Female (Has to be an error based on the name, birth year matches father)

On the Census ledger it listed William's parents and family living with TA Spearman, and TA Spearman as having real estate valued at $900 and personal property valued at $200.

posted 24 Feb 2017 by Donnie Blackstone   [thank Donnie]
Login to add a memory.
Is William your ancestor? Please don't go away! 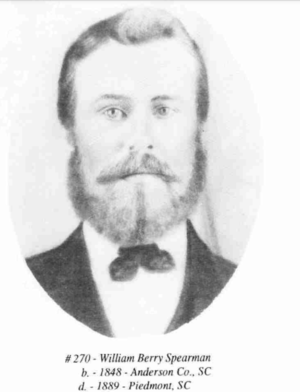