It was Herbert Spencer who coined the term "Survival of the Fittest."

It should be noted that Spencer published his idea of the evolution of biological species before the views of Charles Darwin and the British naturalist Alfred Russel Wallace were known. Spencer at that time thought that evolution was caused by the inheritance of acquired characteristics, whereas Darwin and Wallace attributed it to natural selection. Spencer later accepted the theory that natural selection was one of the causes of biological evolution. [1]

Spencer developed an all-embracing conception of evolution as the progressive development of the physical world, biological organisms, the human mind, and human culture and societies. As a polymath, he contributed to a wide range of subjects, including ethics, religion, anthropology, economics, political theory, philosophy, literature, astronomy, biology, sociology, and psychology. During his lifetime he achieved tremendous authority, mainly in English-speaking academia. "The only other English philosopher to have achieved anything like such widespread popularity was Bertrand Russell, and that was in the 20th century." Spencer was "the single most famous European intellectual in the closing decades of the nineteenth century" but his influence declined sharply after 1900: "Who now reads Spencer?" asked Talcott Parsons in 1937.

Spencer is best known for the expression "survival of the fittest", which he coined in Principles of Biology (1864), after reading Charles Darwin's On the Origin of Species. This term strongly suggests natural selection, yet as Spencer extended evolution into realms of sociology and ethics, he also made use of Lamarckism.[2]

ask our community of genealogists a question.
Sponsored Search by Ancestry.com
DNA
No known carriers of Herbert's ancestors' DNA have taken a DNA test.

Images: 1
Herbert Spencer who coined "Survival of the Fittest." 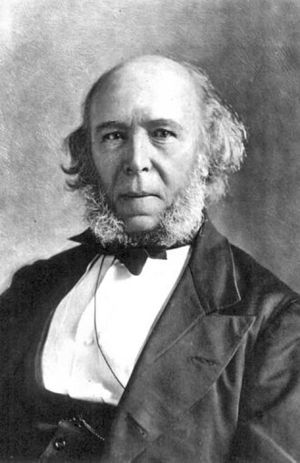