In January, 1920, Thomas Elijah Spencer was attending school and living with his family on a farm in Pleasant Hill Township in Sullivan County, Missouri they owned without a mortgage. His parents were both able to read and write. Enumerated in the household were:

In April, 1930, Thomas Elijah Spencer was living with his family on a farm in Pleasant Hill Township in Sullivan County, Missouri. They did not own a radio set. Enumerated in the household were:

In April, 1940, Thomas Elijah Spencer & Opha Dell Fanning were living on a rented farm in Clay Township, Sullivan County, Missouri. Both of them had completed 8th grade. He worked 52 weeks in 1939, earning $300.00. Enumerated in the household were:

Thomas Elijah Spencer registered for the draft on October 16, 1940 in Newtown, Sullivan County, Missouri. He was described as employed by Edgar Judd, 5'11" tall, weighing 135 lbs., with blue eyes, brown hair, and a light brown complexion.

Thomas began his career as a farmer then as a plater for Bendix Corporation. He moved from Cora to Kansas City in 1952, then to Drexel in 1958, then to Archie in 1984. In 1990 he moved to Harrisonville MO to live out his Golden years. He enjoyed fishing and hunting all his life.

ask our community of genealogists a question.
Sponsored Search by Ancestry.com
DNA Connections
It may be possible to confirm family relationships with Thomas by comparing test results with other carriers of his ancestors' Y-chromosome or mitochondrial DNA. However, there are no known yDNA or mtDNA test-takers in his direct paternal or maternal line. It is likely that these autosomal DNA test-takers will share DNA with Thomas: 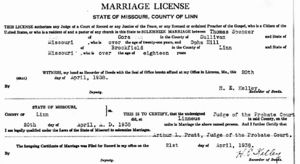 Thomas is 21 degrees from Peter Roberts, 16 degrees from Emma Smith and 17 degrees from Henry VIII of England on our single family tree. Login to find your connection.