Although not part of a project, this profile has been protected to facilitate merging with duplicate profiles created using her first husband's surname. Contact me for more information.

Elizabeth, the only one of William's children who left descendants, married twice: Robert Sheppard, Thomas Warren.

William Spencer immigrated to Jamestown in 1607 on the Sarah Constant with Christopher Newport.[2]. If Elizabeth was born in Jamestown and not England, her date of birth would be around 1607-1623. If she was born after 1624, then the first 5-7 children credited to her in this bio are probably not hers, but Priscilla's (after immigration) by Robert Sheppard's first marriage. (see Boddie, p. 48, Colonial Surry, amb)

Elizabeth was the second wife of Robert Sheppard. His first wife was Priscilla. He patented 300 acres at the head of Chippoakes Creek, current Surry County, 19 July 1635. He was a Burgess for James City County from 1646 until 1648. In 1652/3 he was referred to as "Robert Sheppard of Lawne's Creek, Gent.", at which time Sheppard deeded 1100 acres at the mouth of the creek to Lt. William Caufield. Sheppard was deceased before 5 July 1654, when Elizabeth asked a Mr. Brewster to represent her in a transaction.

Robert Sheppard and Elizabeth Spencer had 3 sons, John, Robert,[6] and William all of whom died without issue. Only their daughter, Anne Sheppard who married Thomas Hart, carried the bloodline.

Elizabeth's second husband was "Thomas Warren of Smith's Fort, Gent."
They may have had one child.


From Genealogies of Virginia Families, Volume IV, 1981: On September 23, 1654, "Elizabeth (Spencer) Sheppard, widow, and Thomas Warren of Smith's Fort, Surry, Gent., entered into a premarital contract in which Elizabeth was to retain the estate of her deceased husband, Major Robert Sheppard, including one gold seal ring marked D. S., one pair of silver tongs marked R. S., and one silver ink horn marked I. S."

They lived at Smith's Fort Plantation in Surry County, Virginia where Warren had built his house two years prior to their marriage on land which he had purchased from Thomas Rolfe, son of John Rolfe and Pocahontas. 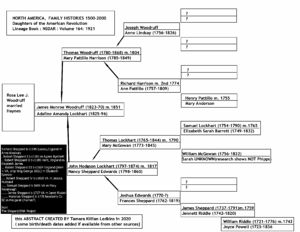 Leave a message for others who see this profile.
There are no comments yet.
Login to post a comment.
Trudy Roach
Ok. In answer to Isaac's questions. The bio states Elizabeth Spencer was born before 1624. This is most likely wrong. According to sources listed on this profile- William Spencer, his wife Alice and daughter Alice were listed in the 1624/25 census. William Spencer jr. was listed among the dead. Indian attacks and disease took many. Daughter Alice was 4 years of age at that time. I can find no mention of Alice again after this. That doesn't mean there isn't any mention of her, it means I can't find any. Most researchers I found think she died shortly after William jr. So no mention of Elizabeth or her sister Ann until after 1624/25. So birthdate would be more correctly referred to as after 1624/25 per sources on this profile.

posted Feb 07, 2020 by Trudy Roach
Isaac Taylor
Why does this bio say "Only their daughter, Anne Sheppard who married Thomas Hart, carried the bloodline" when, in fact, we have the other daughter Elizabeth Lane connected, with living descendants?

Who is managing this profile, these days?

posted Dec 22, 2019 by Isaac Taylor
Trudy Roach
Hi Isaac. I am still on the trusted list. What has happened is people have popped in done an edit without updating the bio. Ill go through and check it all out tommorow. 12-262019 and check all the sources. And let you know. I think there who 2 sons named Wiiliam one died very young. The second William I would have to check out I don't remember. Alice, I have been unable to find any mention of her from after the early Jamestowne Indian Wars and the illness that hit around 1623/1624. And Ann married. So I'll look. Thanks for bringing it up.
posted Dec 26, 2019 by Trudy Roach
Isaac Taylor
For the birth and death places on this profile, are we saying "Surry County, Virginia" or is "Surry, Virginia" a different place. A town?

Because Surry County didn't exist until 1652, right? Prior to that, what later became Surry County was all within James City County, as far as I know.

It might be helpful for this and other profiles from this era and region if we standardized on the syntax:

(e.g. the contemporary/colonial 'Chebacco Parish, Ipswich, Essex, Massachusetts' where I grew up.)

...and in the many cases when we don't have that info for whatever reason, then to explicitly include the word "county" like: 'Surry County, Virginia' (or e.g. 'Essex County, Massachusetts') here on WikiTree.

posted Sep 09, 2019 by Isaac Taylor
Trudy Roach
Thanks Anna.
posted Feb 15, 2016 by Trudy Roach
Anna Lane
Spencer-11709 and Spencer-2005 appear to represent the same person because: There are some similarities between the two. It is possible that someone mis read when one of them was born to be the discrepancy in the birthdates.
posted Feb 10, 2016 by Anna Lane

Donna (McGill) Thompson
Spencer-11709 and Spencer-2005 are not ready to be merged because: More research needs to be done because of different last names and mothers name
posted Feb 09, 2016 by Donna (McGill) Thompson
Trudy Roach
Spencer-11709 and Spencer-2005 appear to represent the same person because: Same person
posted Feb 09, 2016 by Trudy Roach
Trudy Roach
I would like to detach Singleton -385 as Elizabeth's daughter. I have posted the reason on her profile. The only Lucille Singleton I can find of that time period is sourced as being married to a William Newsum. I am looking into whether or not she was a daughter of Robert Sheppard and Prisilla Green. Thanks Trudy.
posted Nov 14, 2015 by Trudy Roach

Brenda (Cockrum) Gravitt
My family line runs from Elizabeth's sister, Anne Spencer. Ann was the 2nd wife of Captain William Cockerham and had at least one child, William cockerham II. the information I obtained while researching Anne is that Elizabeth was born between 1618 - 1626. She married Major Robert Sheppard in 1644. He died in 1654 and she married Thomas Warren. She had a child with Major Sheppard, Anne. Anne Sheppard married twice and had 7 children. Anne was born 1645 in Jamestown, VA and died on 3/20/1711 in VA. I have entered info for Elizabeth as the sister of Anne, so her profile came up as a duplicate. I would like to merge the two files but maybe we need to email to compare info. I will send you a request. email is bkgravitt@gmail.com
posted Jun 27, 2014 by Brenda (Cockrum) Gravitt

but have found no sources stating such.

This would fit Elizabeth's DoB of c.1624 and also the fact that Richard's first wife was alive until at least 1635.

Michelle (Bairfield) Brooks
I have added sources and cited different parts of Elizabeth's bio concerning her possible DoB and date of her 1st marriage - there is a bit of speculation and inference - nothing concrete except:

So, I placed a date guess in her bio. I also moved children Dorothy, Mary, and Priscilla to Robert's first wife. There is documentation that those 3 immigrated to the Colonies with their mother, Priscilla before 1635.

Elizabeth is 19 degrees from Danielle Liard, 15 degrees from Jack London and 10 degrees from Henry VIII of England on our single family tree. Login to find your connection.