John Spencer was born in Virginia. His father was about 10 years old when Cornwallis surrendered in 1781. Both his grandfather's were militant patriots based on the newspaper story which I have added here. This also states his mother was born in 1777. However nothing states the name of his parents. The story also states John's family was 7 miles outside of Martinsburg.

He lived in Berkley County, Virginia when he married and began a family. John in about the 1830's migrated to Champaign County, Ohio. He remained there only a few years before migrating to Van Buren County, Iowa. To offer his children the ability to have land near him. He shows up in Lebanon, Van Buren County, Iowa in 1849.

John's wife Sarah died in Iowa in 1857. John the remarried Mary Ann Hall. He lead a colorful life based on the newspaper story which I find so information correct and other's not correct. Such as his date of birth being 1804. His first child Angeline was born in 1819. Information I have states John's wife was Sarah Butts. I believe it is possible this information could be incorrect.

I do know John's brothers Henry and Thomas also moved to Ohio but not to Iowa. His brothers moved to Logan County, Ohio. 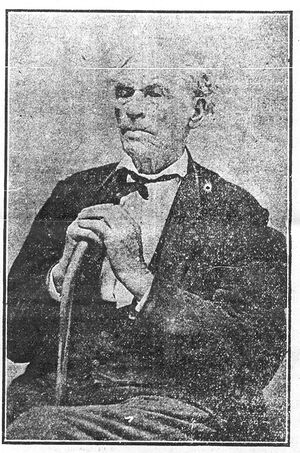