George Spencer was a member of the aristocracy in British Isles.

George Spencer was born 26 January 1738/39, the eldest son of Charles Spencer, 3rd Duke of Marlborough, and his wife Hon. Elizabeth Trevor. George was known by the courtesy title of Marquess of Blandford from birth, and was baptised at St James', Piccadilly.[1]

He succeeded his father as the 4th Duke of Marlborough in 1758 and took his seat in the House of Lords on 8 February 1760. He was appointed Lord Lieutenant of Oxfordshire the same year.[1]

They had eight children:[2]

from Cockayne's 'The Complete Peerage':

"His Grace is said to be a nobleman of great worth, generous, humane and hospitable, no abject courtier, yet a lover of peace, and an enemy to faction."1 The Farington Diaries states that "though nervous in the extreme and reserved, he possesses a great deal of humour." 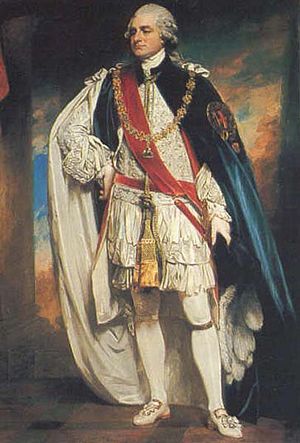