Charles Spencer was a member of the aristocracy in England.

Charles Spencer (1674-1722) became the 3rd Earl of Sunderland upon the death of his father, Sir Robert Spencer.

Charles had three wives: 1) Arabella Cavendish, daughter to the 2nd Duke of Newcastle, who gave him a daughter (Frances Spencer) and unfortunately died within three years of their wedding. 2) Anne Churchill, daughter to the 1st Duke of Marlborough, who gave him five children, and died in 1716. 3) Judith Tichborne, a rich Irishwoman, whose reported three children by Charles all died young.

Queen Anne I disliked him, and dismissed him from the peerage in 1710. She held out a pension of 3000 pounds per annum which he declined to take, remarking that if he "could not serve" his country, then he "would not plunder it."

After his dismissal, he continued to take part in public life until the collapse of the South Sea Bubble ruined his political career. He resigned all offices in 1721, although Charles continued to be a man of influence with King George I until his death in 1722.

He left behind a rich political legacy, at least six living issue, and the renowned Althorp library into which he had poured his spare time and his fortune.

Charles Spencer, 3rd Earl of Sunderland was born circa 1674. He was the son of Robert Spencer, 2nd Earl of Sunderland and Lady Anne Digby. He married, firstly, Lady Arabella Cavendish, daughter of Henry Cavendish, 2nd Duke of Newcastle-upon-Tyne and Frances Pierrepont, on 12 January 1694/95. He married, secondly, Lady Anne Churchill, daughter of John Churchill, 1st Duke of Marlborough and Sarah Jenyns, on 2 January 1699. He married, thirdly, Judith Tichborne, daughter of Benjamin Tichborne and Elizabeth Gibbs, on 16 December 1717 [5 Dec 1717 O.S.]. He died on 19 April 1722 at Sunderland House, Piccadilly, London, England, from pleurisy. He was buried on 1 May 1722 at Brington, Northamptonshire, England. His will was probated in 1723. He was styled as Lord Spencer between 1688 and 1702. He held the office of Member of Parliament (M.P.) (Whig) for Tiverton from 1695 to 1702. He was invested as a Fellow, Royal Society (F.R.S.) on 30 November 1698. He succeeded to the title of 3rd Earl of Sunderland [E., 1643] on 28 September 1702. He succeeded to the title of 5th Baron Spencer of Wormleighton [E., 1603] on 28 September 1702. He graduated from Cambridge University, Cambridge, Cambridgeshire, England, on 16 April 1705 with a Doctor of Laws (LL.D.). He held the office of Envoy Extraordinary to Vienna between June 1705 and November 1705.1 He held the office of an English Commissioner for the Union with Scotland in 1706. He was invested as a Privy Councillor (P.C.) on 3 December 1706.1 He held the office of Secretary of State for the South from 10 December 1706 to June 1710. He held the office of Recorder of Coventry from 1710 to 1722. He held the office of Lord-Lieutenant of Ireland on 21 September 1714, although he never went there. He held the office of Joint Vice-Treasurer [Ireland] between 1 March 1715 and 16 July 1716. He held the office of Lord Privy Seal between 31 August 1715 and December 1716. He held the office of Vice-Treasurer [Ireland] between 16 July 1716 and 6 May 1717. He held the office of Secretary of State for the North between 12 April 1717 and March 1718. He held the office of Lord President of the Council between 16 March 1718 and February 1719. He held the office of First Lord of the Treasury between 21 March 1718 and April 1721, Prime Minister. He resigned in disgrace after the South Seas bubble, in which he was supposed to be involved. He held the office of First Gentleman of the Bedchamber between 1719 and 1722. He held the office of a Lord Justice, Regent of the Realm from 1719 to 1720. He held the office of Groom of the Stole from 1719 to 1722. He was invested as a Knight, Order of the Garter (K.G.) on 21 November 1719. Cockayne writes, " 'a youth of extraordinary hopes, very learned for his age, and ingenious,' says Evelyn; but says Macaulay, 'the precocious maurity of the young man's intellectual and moral character had excited hopes which were not destined to be realized.' " Cockayne also writes, "Macky gives him a high character when 'turned 30.' but Swift emphatically put 'no' to the 'virtue' with which he is there credited. He was, says Macaulay, 'a Whig, unhappily for the Whig party, which, before the unhonoured and unlamented close of his life, was more than once brought to the verge of ruin by his violent temper and crooked politics.' According to William, 1st Marquess of Lansdowne, he 'was the most intriguing man that ever existed after his father—whether he was as corrupt or quite as bad a man ... I cannot tell ... [he] was the most passionate man of his time.' His character is sketched not unfavourably by Earl Stanhope." Cockayne goes on to quote other views, including "G.M. Trevelyan describes him as 'a true Mœcenas ... In contrast to his unprincipled father, Sunderland was a sincere and straightforward Whig. But he was intemperate and unwise, and not personally popular. Queen Anne dislike him.' It is said that she offered him a life pension of £3,000 p.a. to get rid of him, and he replied that if he could serve his country he would not plunder it. Winston Churchill says that 'he had none of the insinuating charm and genial courtesy of his incomprehensible father. He was an ultra-Whig of the straightest and most unbending type ... He was so conscious of the rights of his order and of Parliament against the Crown that he had little sympathy left for the commonality.' " He was from his youth a great collector of books. The 'Sunderland' library formed by him at Sunderland House, and long kept at Blenheim, after it had been pledged to his father-in-law for £10,000, realised nearly £60,000 when broken up, 1882-83."

Children: His first wife was Arabella Cavendish, daughter of Henry Cavendish, 2nd Duke of Newcastle. They had a single daughter:

His second wife was Lady Anne Churchill. They had five children:

His third wife was Judith Tichborne. They had three children who all died young. 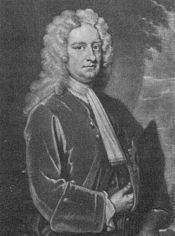 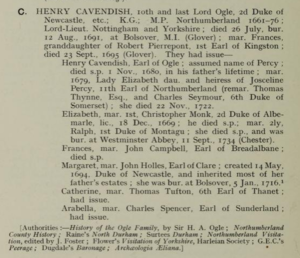 Categories: Lord Presidents of the Council | Lords Lieutenant of Ireland | Knights Companion of the Garter | Privy Counsellors of Great Britain | Lord Keeper of the Privy Seal | Fellows of the Royal Society | Earls of Sunderland