Diana Spencer was born on July 7, 1838 in Imlay City, Lapeer, Michigan. Diana is the daughter of Cyrus Spencer and Polly Huntley.

Diana marries to David Matoon on May 18, 1859 at Lapeer, Michigan. David Matoon is the son of Unknown Father and Unknown Mother Matoon.

Children of Diana Spencer and David Mattoon are:

1. Cora Mattoon was born on May 20, 1860 in Michigan. Marries to Unknown Nickerson. Cora dies on November 2, 1925 at Ferndale, Oakland County, Michigan.

2. Clayton Mattoon was born in about 1863 in Michigan. Clayton marries to Eva Rogers on September 25, 1869 at Lapeer, Lapeer, Michigan. Eva Rogers is the daughter of William rogers and Unknown Mother.

3. Harry Mattoon was born on April 30, 1870 in Michigan. Harry marries to Maggie Arnold on February 14, 1900 at Lapeer, Lapeer, Michigan. Maggie Arnold is the daughter of Frank Arnold and Celia Wentworth. Harry dies on September 9, 1946 at Attica, Lapeer County, Michigan.

4. Carrie Mattoon was born in about 1871 in Michigan. Carrie marries to Unknown Robinson. Carrie dies on March 6, 1904 at Attica, Lapeer, Michigan.

ask our community of genealogists a question.
Sponsored Search by Ancestry.com
DNA Connections
It may be possible to confirm family relationships with Diana by comparing test results with other carriers of her mitochondrial DNA. However, there are no known mtDNA test-takers in her direct maternal line. It is likely that these autosomal DNA test-takers will share DNA with Diana: 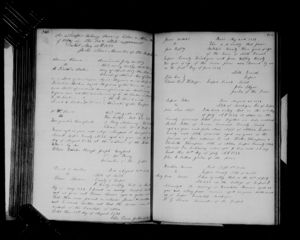 Diana is 20 degrees from Danielle Liard, 13 degrees from Jack London and 16 degrees from Henry VIII of England on our single family tree. Login to find your connection.