Benjamin Spencer was born on December 25, 1820 at Kitley Township, Leeds County, Ontario, Canada. He is the son of Norman Spencer and Ruth Huntley. Benjamin dies on December 20, 1904 at Attica, Lapeer, Michigan.

Children of Benjamin Spencer and Sarah Slack are:

Children of Benjamin Spencer and Abbey Sleeper are:

Benjamin marries third to Lois Dudley. Lois was born in Michigan in about 1832 to Joel Dudley and Lucretia Townsend. Lois was the widow of Lafayette Northrop. She dies in about 1915 in Thornville, Michigan, USA.

Children of Benjamin Spencer and Lois Dudley are:

ask our community of genealogists a question.
Sponsored Search by Ancestry.com
DNA Connections
It may be possible to confirm family relationships with Benjamin by comparing test results with other carriers of his Y-chromosome or his mother's mitochondrial DNA. Y-chromosome DNA test-takers in his direct paternal line on WikiTree: It is likely that these autosomal DNA test-takers will share DNA with Benjamin: 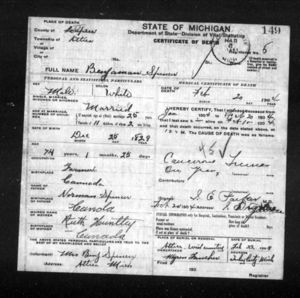 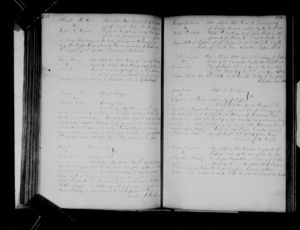 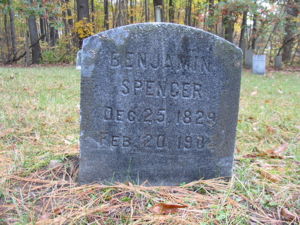 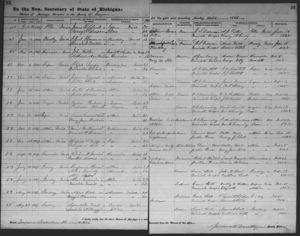 Leave a message for others who see this profile.
There are no comments yet.
Login to post a comment.
A. Cooper
Perry W Spencer was the son of Sarah Slack and Benjamin Spencer. He died 15 Mar 1933 according to his death record. I think this probably means Sarah Slack was the first wife. Source Information

Benjamin is 19 degrees from Danielle Liard, 13 degrees from Jack London and 15 degrees from Henry VIII of England on our single family tree. Login to find your connection.