Mary "Polly" Spencer was born about 1792 in Hinesburg, Chittenden, Vermont, USA. Polly Spencer is the daughter of Daniel Spencer and Maria Spencer.

Glimpses of the life and work of the Reverend Richard Bradford By: Grace D. Bradford McGibbon Mr. Bradford would take his usual Sunday service in St. Andrews on March 27, 1808, and apparently he took another one at Lachute or possibly Beech Ridge. At one of these latter places he united in marriage Gideon Blackman of Lachute District and Polly Spencer of the same place, who was 19 years of age. The witnesses were Aaron Hamblin and Samuel Blackman, and they were also Lachute people. D. H. Spencer had been living on lot 2, first Concession of Col. Robertson's land, but may have left there a little before this time, or Polly may have been working in a home in the Seigniory. Many girls worked as maids in homes, others worked in the paper mill in St. Andrews. Boys also worked in the paper mill.

Is Polly your ancestor? Please don't go away!

ask our community of genealogists a question.
Sponsored Search by Ancestry.com
DNA Connections
It may be possible to confirm family relationships with Polly by comparing test results with other carriers of her mitochondrial DNA. However, there are no known mtDNA test-takers in her direct maternal line. It is likely that these autosomal DNA test-takers will share DNA with Polly: 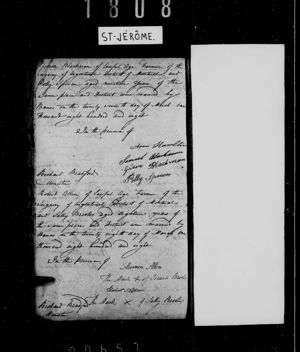 Polly is 19 degrees from Danielle Liard, 12 degrees from Jack London and 15 degrees from Henry VIII of England on our single family tree. Login to find your connection.