John "of Edworth" Spencer
Born about 1505 in England

John Spencer, whose parents and birthplace have not been identified, was born probably within a few years after 1500 in Bedfordshire, probably in the village of Edworth.

He married Anne Merrill whose brothers lived in Biggleswade, 2 miles to the north.

They had the following three sons:

Feb 12, 2018 Update by Robert Spencer UEL, hope this clarifies things on the issue of the wife of John Spencer of Edworth, as new information eliminates Anne Clarke as a wife, she is named in a will of another John Spencer, who resided in London, with many children and was well documented in church records there. I'm not sure she's mentioned by name in any document!

Evidence in Support of Anne Merrill

The will of John Spencer's widow, dated 13 June 1560, proved 21 Apr 1561, includes the following: brother Edward's children, to have the £1 that he borrowed of her, and the barley he gave her sons to his children; Nicholas Merryll and John Merryll his brother, to have the barley their father gave her sons... "From the terms of the will, it would seem that Anne's brother was Edward Merryll or Merrill, and that this was her maiden name. A search of Merrill wills might confirm this conjecture."[5]

The will of John Merell, husbandman of Biggleswade, made 12 Oct 1558, proved 5 Dec 1558, mentions his brother Edward Morell of Stratton; his sons Nicholas and John (compare with Ann Spencer's 1560 will), and just to confirm the hypothesis "To his brother Spenser's children at Edworth a quarter of barley each." which ties in with Anne's will "Nicholas Merryll and John Merryll his brother, to have the barley their father gave her sons..."[6]

The other thing that strikes me about the Edworth family are the names - they don't fit the naming pattern of the Blunham/Eaton Socon Spencers who only named their sons John or Robert! eg Michael and Gerard Could this indicate they were of different Spencer stock?

John Spencer left no will that has been traced, but his widow did:

from Anne's will dated 13 Jun 1560, proved 21 Apr 1561, she mentioned her son Gerard (aged 17); son Michael to have the chest that was his brother John's; John Spencer, son Michael's child, to have £20. Jacobus [7] gained the impression that "our Spencer family at that period was of the yeoman class, and somewhat better off than the average village family of the time and place. Whether they were in origin a younger branch of an older gentry family, or a more humble clan which by industry and good fortune had improved its lot, we are not in a position to affirm. It would be necessary to prove the parentage and more remote ancestry of John Spencer, Sr., by documentary evidence, before claiming any specific connection with any other Spencer family in England." So Jacobus is saying that the parents of John who died in 1558 aren't known.

Origins according to Holding

According to the Rev. Holding, John was a son of John Spencer of South Mylls.Source? From an extensive search of records in Bedfordshire Mr Holding ascertained to his satisfaction that John Spencer, the 18th in descent from Robert the steward of King William, was the John Spencer who resided at St.Albans, England in 1553, and who later moved to Kempston and Edworth, Bedfordshire, and is the ancestor of the Massachusetts and Connecticut Spencers. In the year 1553 a Royal charter was given to the town of St. Albans by Edward VI. One of the chief burgesses or alderman was John Spencer. Shortly afterwards he moved to Edworth, (evidence?)where he died a few years later, in 1558, and where his family resided. The previous sentence says he moved first to Kempston before moving to Edworth. Yet John Spencer of Kempston is mentioned in John Spencer of Pavenham's 1531 will, so he was in Kempston much earlier than is supposed in this biography

Rev. John Holding. He says: "There is every indication that previous to his advent at Edworth, John resided at St.Albans, where he was held in such high esteem as to be chosen one of the first chief burgesses of that town, and as such is named in the Royal charter granted to that town by King Edward VI in 1533."[citation needed] What's the evidence that it was the same John Spencer who moved from St Albans to Edworth . When was the Royal Charter in St Albans? 1533 or 1553. The two dates seem to be used interchangeably. Makes a big difference. Edward VI only reigned from 1547 to 1553

The John Spencer in St Albans is much more likely to be John, of South Mills and Bramfield, who possibly travelled to St Albans stopping off in Kempston on the way. It would explain the link to John of Pavenham who died in 1532 John

From research made by Mr. Holding it appears that John Spencer occupied a farm of about 600 acres at Edworth, as lessee of Robert Parry of Ellington, who was then lord of the Manor. Are there any dates which might help fix when he allegedly moved from St Albans? Writing of the will of Anne Spencer, Mr Holding says: "It is interesting as showing the position in life she occupied, and her kindly, thought nature. The enumeration of stock and chattels, and her bequests certainly show that the family was at least that of a prosperous gentleman." "She nowhere makes mention of land or tenements belonging to her. There is only the lease of the farm which evidently refers to the ones of which she was then the tenant, and which is handed on to her oldest son Michael." Regarding the Edworth farm Mr Holding says: "Edworth is a parish on the borders of Hertfordshire, and is situated half way between Baldock and Biggleswade. There have always been two large farms in Edworth, comprising really the whole land in the parish, with the exception of about 8 acres glebeland attached to the rectory, giving a total of about 1122 acres." "So that the Spencer farm would cover about 600 acres in extent, a large farm even at that present time, and gave employment to half the laboring poor of the place. The Hall, where the Spencers resided, is still standing, although much modernized. what's the evidence they lived at the Hall? The evidence is that others lived at the manor house There is none: these Spencers are yeoman farmers and husbandmen, not gentlefolk. While clearly comfortably off, the wills make it clear they are prosperous farmers.

In the absence of baptisms, it is quite probable that Michael Spencer of Edworth and Gerrard Spencer of Biggleswade were sons of John Spencer Senior and Ann Spencer whose burials are recorded in Edworth register the former June 9 1558 and the latter June 16 1560, given the evidence provided by Anne's will. Nothing more is known of them other than what is disclosed by these records and the absence of further information may be accounted for by the fact that Edworth registers do not extend back beyond 1552 and that many wills and valuable records and documents it is said (by whom?) were destroyed during the civil war. IF it was John Spencer of St Albans who moved to Edworth after 1553 the three sons would all have been born in St Albans. But I have seen no evidence that it was the same John. 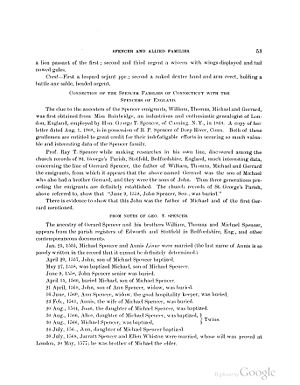 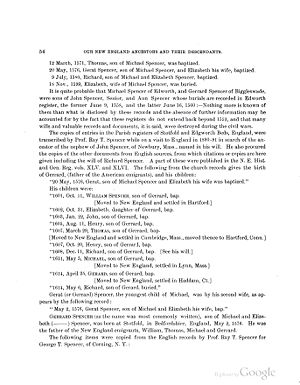 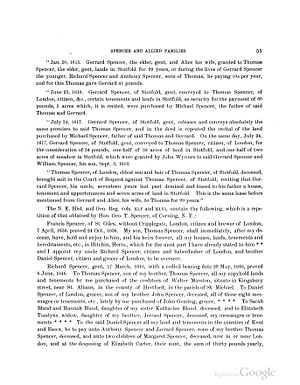 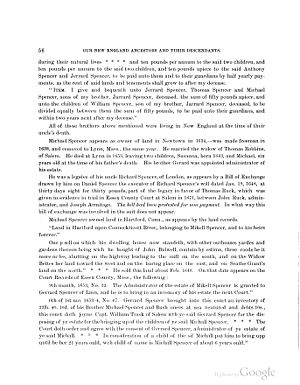 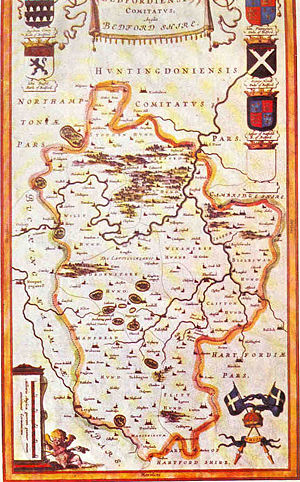 Leave a message for others who see this profile.
There are no comments yet.
Login to post a comment.
White White
I have more further back on parents

Jo Fitz-Henry
Thanks for posting this White. Would you post the sources for these previous generations? That would be smashing.

Stephen Trueblood
These ancestors are of one of the other 'John Spencers' kicking around the East Midlands at this time. Specifically https://www.wikitree.com/wiki/Spencer-205 We have to take great care with the Spencer line as there are several branches of the family living not too far apart at the same time. Even worse, the Spencers were making up spurious genealogies for themselves by late Tudor times. It is not possible (so far) to link all these branches together.
posted Jan 02, 2020 by Stephen Trueblood
Anonymous Spencer
The below paragraph, shown here, should read as below it--w/ [ ]'s moved a bit to make it more "clear: Instead of:

Michael Spencer's brother lived in Hitchin and had children born in Hitchin, Herts. which is 5 miles from Arlesey and close to Stotfold.

Correction: Robert Parry's married Elizabeth Spencer , the daughter ( not sister) of [Thomas Spencer who was born in 1514 and died in 1547]-son of John Spencer of Pavenham, Elizabeth was given the "Spencer farm" in Edworth as part of her dower.

Thomas Parrys also held land in Stotfold. It appears the Spencer's of Edworth followed this Parry's family as leasee tenants, and not as fee holders in Edworth, Stotfold and Hitchin.

Jerrard Spencer who sold land in Edworth in 1610 , also had a "bond loan" from Ralph Radcliffe in 1615, the owner holder of Hitchin manor. The relationship with Hitchin Manor is solid.

The History of Arlesey and Edworth follow the identical succession of the moiety of overlordship. Robert Bullock held Edworth in 1428, his surety in a CP case in 1404 was William Spencer. This William was likely a Lawyer and Gent. of Biggleswade and later trustee for Edworth . He appears elsewhere in Beds also.

posted Aug 08, 2019 by Robert Spencer
David Cooper
Can a profile manager kindly disconnect John from his parents John and Christian please. I have agreed with Robert Spencer that they weren't his parents (as is stated in the opening words of the biography). In the past he has become confused with their actual son John, who married Anne Clarke and was a grocer in London, as shown in the Visitations of Bedfordshire. Thanks
posted May 26, 2019 by David Cooper
Robert Spencer
On May 12th, in the 7th Regnal year of Edward VI (1553). A John Spencer was named as one of 10 chief Burgesses of common council, this was likely the John Spencer who married Christine Baker and 2ndly, Etheldreda ( nee Coker), widow of Richard Watkyns Vaughn. John Spencer held land in Bramfield, Herts, and he didn't die until 1560. There is no evidence that this John Spencer was the one who later farmed in Edworth. The source is here: https://books.google.ca/books?id=JwsHAAAAQAAJ&pg=PR37&lpg=PR37&dq=john+spencer+burgesses+of+st.+albans&source=bl&ots=kgt5BDbbW4&sig=ACfU3U0QrPTy_dxlK4mBjUrbiYCiaL98og&hl=en&sa=X&ved=2ahUKEwjH3ej28bLiAhXhmOAKHZYzAT8Q6AEwCHoECAcQAQ#v=onepage&q=john%20spencer%20burgesses%20of%20st.%20albans&f=false

posted May 24, 2019 by Robert Spencer
David Cooper
Does anyone know where the Rev Holding's research can be viewed?
posted May 20, 2019 by David Cooper

Gillian Thomas
Hi Profile managers, thank you for your care for John Spencer's profile. The England Project has taken on management of his profile as it is project protected. We invite you to join the project and continue to contribute your expertise about him and his family. Please get back to me if you have any questions about this. Regards, Gillian, Leader England Project.
posted Oct 16, 2018 by Gillian Thomas

Gillian Thomas
Hi profile managers, the England Project would like to take on management of this profile. See https://www.wikitree.com/wiki/Help:Project_Protecting_and_Merging for more information. I am adding the England project box today and will send you a trusted list request to add me to the trusted list for the profile. Please contact me if you would like to discuss. Regards, Gillian, Leader, England Project.
posted Oct 13, 2018 by Gillian Thomas

Jillaine Smith
This profile is Project-protected. Which project please? Thanks.
posted Feb 01, 2018 by Jillaine Smith

John is 20 degrees from Danielle Liard, 13 degrees from Jack London and 12 degrees from Henry VIII of England on our single family tree. Login to find your connection.