This profile is part of the Spencer Name Study.

Michael Spencer, son of Jarrard Spencer and Alice Whitbread, was baptized 5 May 1611 in Stotfold, Bedfordshire, England.[1]

Michael Spencer findagrave memorial 44849433: his widow is believed to be buried in The Burying Point, Salem, Massachusetts.

Source: Spencer Family History and Genealogy, Robert Closson, Reprint from the collections of the New York Public Library; Preface Robert C. Spencer, Milwaukee, Wisc., 1 Aug 1869. This reprint will provide much information on Spencer Genealogy, when coupled with the authored works of Donald Lines Jacobus, 64 pages Spencer Genealogy, a proper profile is generated. It is important to refer to the Spencer DNA images to maintain accuracy in documentation. It is advised for interested persons in this profile, to refer to the wills of Michael Spencer Spencer-97, (his second wife Isabel ____, Robbins unknown-137152) and Thomas Robbins Robbins-215. For those requesting sources, please refer to the wiki profiles in the first, second, third, and fourth generations of Michael Spencer provided in the two images I uploaded. Correcting the errors presented in these profiles is a task I do not have time to correct, my husband and I are close to our 80s, our time is for our living children. GOD Bless all of you.

Sponsored Search by Ancestry.com
DNA Connections
It may be possible to confirm family relationships with Michael by comparing test results with other carriers of his Y-chromosome or his mother's mitochondrial DNA. Y-chromosome DNA test-takers in his direct paternal line on WikiTree: 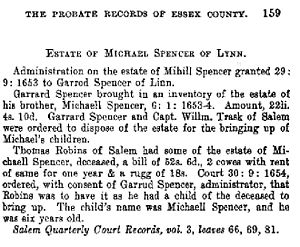 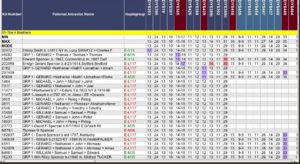 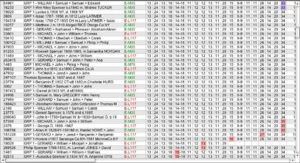 Leave a message for others who see this profile.
There are no comments yet.
Login to post a comment.
Joan (Stone) Jakubowski
Michael, John, Peleg, Peleg; proven Y-DNA; Peleg 1717-1789 Spencer-3304 names his sons in his will, family is documented in wiki, son Peleg Spencer 1756-1834 Spencer-7489 married Sarah Wright 1768-1844 descendant of Abel Wright 1631-1675. This is the ancient Wright Ancestry sourced by author Curtis Wright,1844, pub. 1990: Descendants of John Wright of Kelvedon Hall, Essex, England, including Thomas Wright of Wethersfield, CT., Samuel Wright of Northampton, MA. Sarah Wright-12109 and Zeruiah Wright-12110 are sisters, married sons of Peleg and Audria Spencer, Peleg Spencer 1756-1834 Spencer-7489 and Charles Spencer 1749-1835 Spencer-7465. These Wrights and Spencers connect to time of William the Conqueror and the "Domesday Book".
posted Oct 31, 2019 by Joan (Stone) Jakubowski

Michael is 18 degrees from Danielle Liard, 11 degrees from Jack London and 10 degrees from Henry VIII of England on our single family tree. Login to find your connection.