Henry Adams married Edith Squire in Charlton Mackrell church, and her sister Anne had married Aquila Purchase, an ex-Dorchester schoolmaster, a parishioner and fervent supporter of the Rev. John White. Aquila's brother was an early settler in Brunswick, Maine. The sisters Edith and Anne Squire were granddaughters of the Rev. William Squire, rector of Charlton Mackrell, to whom reference has already been made.

Without any sources/citations her middle name had been shown as Rosamund. No responses received to queries posted to her profile about this middle name; it has now been removed.

Sponsored Search by Ancestry.com
DNA
No known carriers of Edith's DNA have taken a DNA test. 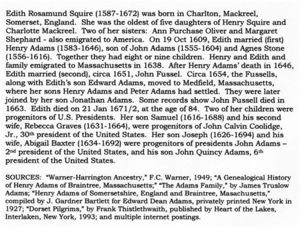 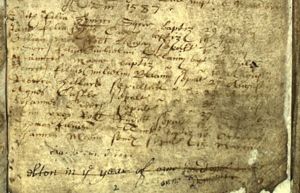 Mindy Silva
The two Joseph's may have been a result of the old merge. Is it possible to detach the parents and then reattach them? Not sure if this would correct the problem, but it may...
posted Mar 26, 2018 by Mindy Silva

Robin Lee
Squire-787 and Squire-1 appear to represent the same person because: Let's try again, the name on Squire-787 that includes the middle name of Rosamund is the exact same name on the source that there is a picture of on Squire-1. The births are identical. The death date on Squire-787 is totally unsourced and therefore should not come into play in a decision on whether these profiles were intended to be the same person.
posted May 12, 2017 by Robin Lee