He joined the Army while living in St. Cloud on 2 Nov. 1861. He was commissioned a First Lieutenant in Company G, Minnesota 4th Infantry Regiment on 22 Nov. 1861.

A Report in the Congressional Record states: "The claimant in this case is the widow of Lieut. Abner St. Cyr, of Company G, Fourth Regiment of Minnesota Volunteers. Lieutenant St. Cyr was seriously crippled and lamed by a gunshot wound received in the leg while in the service in the late war, for which at the time of his death he was receiving a pension of $17 per month."

He was a saloon keeper in the town of Sauk Rapids, Minnesota. (Gazeteer, 578)

He died at age 49 during the tornado that swept through Sauk Rapids. The details of his death are recorded in the Congressional Record: "On the 14th of April 1886, St. Cyr was keeping a billiard hall near the center of the little village of Sauk Rapids, Minn. while his residence was a quarter of a mile away therefrom in the suburbs of the village. On this day a cyclone of an extraordinary character passed over and through the center of the village leveling and destroying everything in its wake. The billiard hall of St. Cyr was completely wrecked, while his residence in the suburbs was unharmed. The approach of the cyclone was observed by St. Cyr and one Waltman, who was then with him. Both at once started in the direction of St. Cyr's residence to escape. Waltman being a sound man and in good health was able to and did effect his escape uninjured from the storm center, but St. Cyr, owing to the lame and crippled condition of his wounded leg, was able to make but slow progress, and in consequence was overtaken by the cyclone and so severely injured thereby that he died from his injuries the next day."

Is Abner your ancestor? Please don't go away!

ask our community of genealogists a question.
Sponsored Search by Ancestry.com
DNA
No known carriers of Abner's ancestors' DNA have taken a DNA test. 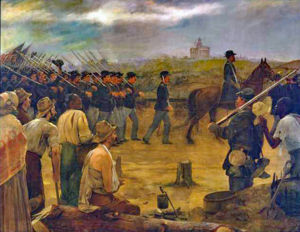