[citation needed] for daughters Joan Ware and the other Margaret

He married Anne Neville, daughter of Sir Ralph Neville, 1st Earl of Westmoreland and Joan Beaufort, before 18 October 1424 (a dispensation having been issued as early as 7 August 1408, they being related in the 3rd degree of kindred on both sides). Their children are:

Sir Humphrey Stafford died on July 1460 at the battle of Northampton. He was buried at Grey Friars, Northampton. His will was proved on 2 December 1460.

"Buckingham appears as a fairly significant character in 2 Henry VI. He is a loyal Lancastrian supporter and fights for the Lancastrians at St Albans, where he is wounded. At the beginning of 3 Henry VI, the Yorkists report that Buckingham has been either wounded or killed during the battle. He is not mentioned again. In reality, Buckingham died in 1460, five years after the Battle of St Albans, at the Battle of Northampton. While Buckingham is not seen again, his grandson and heir is a major character in Richard III, who is ultimately executed by the tyrant king for turning on him."[2][3]

Richardson names only 9 children, but MedLands lists 12, adding Richard, Margaret and Elizabeth. Richard is said to have died young (as also are Edward, George and William). There is no further information on Margaret and Elizabeth. A "primary source", namely a manuscript pedigree of ca. 1500, is cited for only the more significant children.

George and William are said elsewhere to have been twins.

Sponsored Search by Ancestry.com
DNA Connections
It may be possible to confirm family relationships with Humphrey by comparing test results with other carriers of his Y-chromosome or his mother's mitochondrial DNA. Y-chromosome DNA test-takers in his direct paternal line on WikiTree: 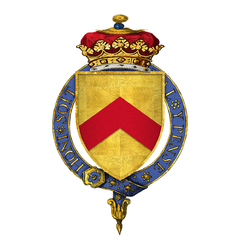 Glad you had such amazing luck, I dohope that all prsons are fully researched. By the way it is notusual to explore your ancestry in the way you have on a profile , if everyone id likewise there wouldbechaos on all the profiles. Perahps next time keep comments to the catual profile person. Well done though

Fann Fann
Indeed, Kelly, your question is about another Humphrey Stafford, and his wife: Eleanor (Aylesbury) Stafford (abt. 1406 - aft. 1481), both of whom are present with their own profiles and lineages. I hope you found them!
posted Nov 22, 2018 by Fann Fann
Kelly (Evans) Yee
I have place of birth as Grafton, Worcestershire, England. I believe his second wife was Eleanor Aylesbury (1407-1482) - married 1426 in Milton Keynes, Buckinghamshire, England. HUmphrey Stafford Knt is supposed to be their son. I have his place of death as either Bromsgrove, Worcestershire, England or Sevenoaks, Sevenoaks District, Kent, England.
posted Aug 04, 2017 by Kelly (Evans) Yee
Jason Clark
No sign of an extra Joan or Margaret. Robert Ware marries Thomasine Chipley, by Ware sources. He should probably be dropped as the extra Joan's husband and the two girls merged into their duplicates.
posted Mar 30, 2016 by Jason Clark

Categories: Knights Companion of the Garter | Battle of Northampton (1460) | Battle of Ludford Bridge | This Day In History July 10 | Shakespearean Characters