Sir Humphrey Stafford
Born about 1 May 1478 in England

Bindoff (1982), states that Humphrey was of Blatherwycke & Dodford in Northamptonshire, and that this branch of the Staffords had their, "family ... fortunes ... depleted," in the 15th century.[2]

Foster (1891), asserted that Humphrey descends from Edward I, through the marriage of Margaret and John Stafford in c. 1341/2, which united two branches of the Stafford family during the reign of Edward III.[3]

While Humphrey is a direct descendant of Earl Stafford, Richardson (n.d.), breaks the connection to Edward I, by asserting that John Stafford's [of Amalcote] mother-in-law was Katherine Hastang, instead of Magaret de Audeley.

Margaret was the daughter of:

She was a legatee in the 1490 will of her father, she being then unmarried.

In 1514 his father’s attainder was reversed, and the family estates partially restored to him, including the manors of

In 1508–9 John Hoke, butcher, of Derby, kinsman and heir of John Somerby, clerk, conveyed the manor and advowson of the church of Great Munden and the advowson of Rowney Priory, Herts to Humphrey Stafford and his cousin, William Waldegrave, Knt.

"Draft inquisition taken at Warwick before Richard Newport, gent., eschaetor for the county of Warwick, upon the death of Humphrey Stafford, knight. The jurors swear that he was seised in demesne as of fee in the manors of Lemington Hastings, Grenburgh and Burton, alias Burton upon Dunsmoor in Warwickshire and in 32 messuages, 60 cottages, 600 acres of land, 41 acres of meadow, 600 acres of pasture, 12 acres of woods and 4 acres of heath in Lemyngton, Grenborough, Burton, Hyll, Napton, Caldecote, Burdebury and Draicote, together with the advowson of Burton. These were held by a charter dated 21 January 1423/4 to:

grandparents of the said Humphrey, to be held of the chief lord of the fee for services due and accustomed.

The jurors also declare that he held the manors of Bradwell, Happesford and Rowdon in Warwickshire, with 16 messuages, 2 cottages, 100 acres of land, 60 acres of meadow, 10 acres of pasture [ms damaged]. Held by charter of Humphrey Stafford, knight, dated 1 October 1442 to John, Bishop of Bath & Wells, Sir Ralph Boteler, Lord of Studley, Sir William Mountford, William Stafford, esq., John Humpage, John Wood, John Massy, Thomas Lytleton and William Pullesdon (as trustees to uses declared under the will of the said Humphrey Stafford) viz: [modern spelling hereafter] Grandborough, Calcutt, Birdingbury & Rawdon were to descend to Thomas Stafford (dvp), one of the sons of Humphrey, at age 18, with successive remainders in default of male issue to his other sons:

Leamington [Hastings], Burton, Hopsford[Hall] and Broadwell were to pass to Humphrey at 21 with similar remainders to the other sons. Thomas and Richard predeceased their father; Ralph and John died without issue and all the estates passed therefore to Humphrey, father of Sir Humphrey (subject of the IPM) to whom they in turn descended.

the following lands, worth 100 marks p.a. were settled on them, with a proviso for a jointure of 40 marks p.a. to Margaret viz:

The manor of Grandborough in the tenure of John Faringday [?] and Richard Brye, worth £25 p.a.

The jurors declare that the annual value of Leamington Hastings is £20 and that it is held in chief of the King for 1 knight's fee.

The Manors of Broadwell & Hill, with lands, are worth [torn ms] and are held of Edward Oneley, esq. as of the manor of Catesby, for service and 10d p.a.

The Manor of Grandborough and lands in Calcutt & Rowdon are worth £23.6s p.a. and are held of the King as part of the estates of the late dissolved priory of Coventry, for service.

The Manor of Hopsford [blanks in ms]"

Humphrey Stafford is on a trail documented by Douglas Richardson between Gateway Ancestor Audrey (Barlowe) Almy and Magna Carta Surety Baron William de Huntingfield (Magna Carta Ancestry, vol. I, pages 114-123 BASSSETT). This trail needs further development by the Magna Carta Project. Profiles in this trail, and their status, can be seen in the Magna Carta Trails on the profile of Stafford Barlow.

ask our community of genealogists a question.
Sponsored Search by Ancestry.com
DNA
No known carriers of Humphrey's DNA have taken a DNA test. 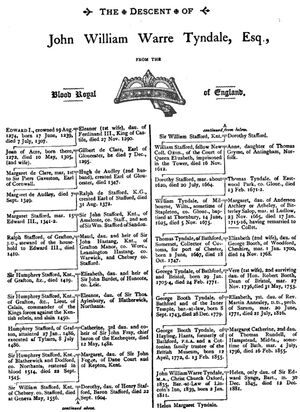 Michael Cayley
Anyone who decides to do serious work on this profile - and that is needed - can look at that. But there may well be no firm source to give an indication of the children's birth dates. If you want, Bree, to do some research on this and see if you can find any sources, please do.
posted Mar 04, 2021 by Michael Cayley
Bree Ogle
It's been a strange research event because second son William's famous marriage to Boleyn tends to eclipse the elder son. So the historical focus centers on William, KB. But luckily ... the inq. pm. of the Humphrey of this profile survived and we can see that his eldest son Humphrey of Blatherwycke was at least age 39 at the time the inq. was taken, placing his birth to in or before c. 1507. We also know that son William's birth was documented by Hist. of Parl. as c. 1512. If our Humphrey married sometime after 1490 ... then it's possible that a dau. was the eldest child.
posted Mar 04, 2021 by Bree Ogle
Laura DeSpain
Stafford-6235 and Stafford-6 appear to represent the same person because: Clear duplicates
posted Feb 28, 2021 by Laura DeSpain

Mike Davies
I am not pre-1500 certified so cannot edit the profile but thanks for the info
posted Oct 12, 2019 by Mike Davies

Have you been able to read it all? he mentions a goblet from uncle Thomas Stafford, then his 2nd wife Dame Jane Stafford and various children.

Glenn Kittredge
Stafford-3428 and Stafford-6 appear to represent the same person because: Date of death the same.
posted Nov 11, 2017 by Glenn Kittredge