Ralph Stafford KG was a member of aristocracy in England.

At the time of Ralph's birth, on 24 September 1301, the Staffords exercised considerable influence in the west midlands, but had yet to assume the prominent role in national affairs that fell to them as a result of his own success as a soldier, administrator, and courtier. The bulk of their estates lay in Staffordshire and Warwickshire, with a few additional holdings in Oxfordshire and Lincolnshire, and generated an annual income of about £200 net. This was not enough to support a senior member of the English baronage, although Edmund de Stafford had sufficiently distinguished himself in the Scottish wars of Edward I to merit a personal summons to parliament. The path of advancement through military service was followed with distinction by his son, whose lasting achievement was to elevate his family to the ranks of the higher nobility.

Having lost his father as a child, Ralph Stafford had come of age and entered his estates by December 1323. He spent his youth in the society of his mother's Staffordshire relatives and of her second husband, a local landowner named Thomas Pipe. Stafford's first known experience of royal service occurred in 1325, when he, his younger brothers, and their stepfather joined the retinue of his maternal uncle, Ralph, second Lord Basset of Drayton. Soon, however, he grew more independent. He was made a knight-banneret in January 1327, being recruited to fight against the Scots shortly afterwards. His support for the plot to free the young Edward III from the control of his mother's lover, Roger Mortimer, earned him the king's lasting gratitude, and marked the beginning of what was to become a close personal relationship. Mortimer's arrest at Nottingham Castle during the parliament of October 1330 enabled Edward to seize the reins of power himself.

Knight of the Garter. Earl of Stafford in 1350. Fought in the Battle of Crecy and Battle of Sluys. Served in the Scotch and French wars and in important diplomatic missions in European countries."

In Apr 1325, he was in the King's service, with his mother and her second husband, and his own brothers, in the company of Ralph, 2nd Lord Basset of Drayton and Constable of Dover Castle. He was made Knight Banneret 13 Jan 1326/27, and on 6 Apr 1327 was summoned to serve against the Scots. He was summoned to Parliament from 29 Nov 1336 to 25 Nov 1350, and served in Scotland in 1336 and 1337. He was in France with the King, returning 29 Nov 1339, and on 23 Jun 1340 was present at the battle of Sluys. In 1342 he sailed to Brittany and took part in the siege of Vannes, where he was captured, and later exchanged for another prisoner. In Apr 1344 he was in Gascony with 3 bannerets, 20 knights, 92 esquires, and 90 archers, and in Oct 1346 was appointed Seneschal of Aquitaine. He was a Knight of the Garter 23 Apr 1348, as one of the founders of that order. On 6 Sep 1348, he was granted for life 600 marks p.a. for his stay for life with the King with 60 men-at-arms. He was present at the naval battle off Winchelsea in Aug 1350, and was created Earl of Stafford 5 Mar 1350/51. He was among the leaders of the King's expedition to France in Oct 1355, and in Oct 1360 was in the vanguard of the army under the Duke of Lancaster, and joint marshal with the Earl of Warwick. In Aug 1360 he was appointed, with others, to treat for peace with France, and was a party to the treaty of Bretigny. He was in Ireland from Sep 1361 to Feb 1361/62, and crossed to France with the King in Oct 1369. He married firstly, about 1326-27, Katherine, dau of Sir John Hastang, and secondly, before 6 Jul 1336, Margaret, daughter of the Earl of Gloucester, Hugh de Audley. He survived his second wife by 24 years. On 6 Jul 1336, a commission had been appointed to enquire into a complaint by Hugh de Audley, that Ralph de Stafford and others, mostly his relatives, had abducted his daughter, Margaret, and married her against his will.

Sir Ralph de Stafford died testate August 31, 1372 and was buried with his second wife Margaret at Tonbridge Priory (Priory of St. Mary Magdalene) at Tonbridge, Kent, at the feet of her parents.

ask our community of genealogists a question.
Sponsored Search by Ancestry.com
DNA Connections
It may be possible to confirm family relationships with Ralph by comparing test results with other carriers of his Y-chromosome or his mother's mitochondrial DNA. Y-chromosome DNA test-takers in his direct paternal line on WikiTree: 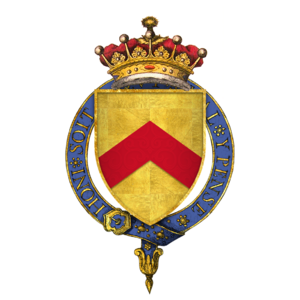 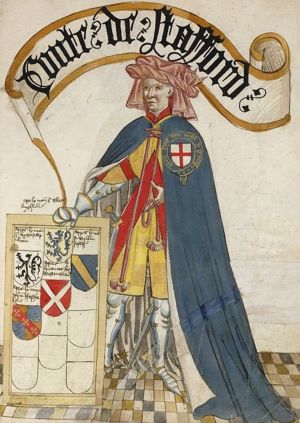 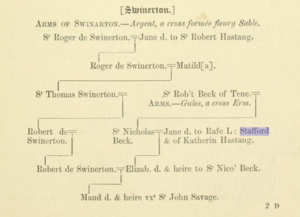 PM Eyestone
Appears there have been problems with identifying his children.

Ralph is 24 degrees from Mary McCauley, 25 degrees from B. W. J. Molier and 7 degrees from Henry VIII of England on our single family tree. Login to find your connection.