Sarah died before June 13, 1688, when Alexander Standish, in right of his wife Sarah, deceased, and the other heirs of John Alden signed a release on his estate.[5]

Will And Testament of Alexander Standish

....21 Feb. 1701/2, ment. unnamed wf and follow. chil., viz: Miles Standish (eldest son), Thomas Standish, Ichabod Standish, Desire Standish, Ebenezer Standish, Lorah Samson wf of Aabraham, Lidia Samson wf of Isaac, Mercy Samson wf of Caleb, Elizabeth Delano wf of Samuel, Sarah Soul wf of Benjamin; brother David Alden;..."Whatsoever Estate Either in New England or in old which I have committed into ye hands of Robert orchard to Recover in England by letters of Attorney...Thus taking my leave of all my near & dear Relations my christian friends in church Covenant & all my loving neighbours I bed you all farwell till we meet in Heaven..." Codicil, 5 July 1702, ment. wf, son Miles & his wf, chil. Thomas, Ichabod & Desire. Wit. sworn 29 July 1702. (On 10 Aug. 1702 the will was contested by Abraham Samson, Isaac Samson, Caleb Samson & Benjamin Soule (& later by Samuel Delano), the husbands of the daughters. The caveat contains a goldmine of information. "He had by his first wife who was daughter to ye Whorshipfull Mr. John Alden a good and a prudent woman two sons and 5 daughters and after her decease he lived a widdower many years untill all his sd 5 daughters or 4 of them were marryed...about 16 years before he dyed he marryed a second wife...by her he had two sons and one daughter." It also states Alexander was about 76 when he made his will, his eldest son married the daughter of the 2nd wife, son Myles was by 1st wife, son Ebenezer was the 2nd son by the 1st wife and his 5 daughters by his 1st wife were all married with children.)

Sponsored Search by Ancestry.com
DNA
No known carriers of Alexander's DNA have taken a DNA test.

The Alexander Standish House Built In 1666 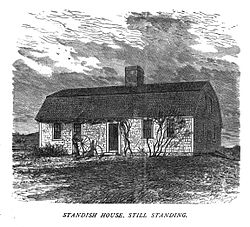 Kathy (Friesen) Johnson
There is a different findagrave memorial than the listed one at https://www.findagrave.com/memorial/971/myles-standish
posted Jun 09, 2018 by Kathy (Friesen) Johnson
Toby Proctor
Standish-1 and Standish-914 are not ready to be merged because: both the mother and father profiles need to be merged.
posted Nov 21, 2014 by Toby Proctor
Janis (Paulding) Swanson
Standish-995 and Standish-1 appear to represent the same person because: Birth, spouse, ch
posted Nov 14, 2014 by Janis (Paulding) Swanson

Alexander is 10 degrees from Frederick Douglass, 13 degrees from Margaret Summitt and 12 degrees from Henry VIII of England on our single family tree. Login to find your connection.