Thomas Stanley was born in England.

An early 1926 genealogy, Ernest Flagg's Genealogical Notes On the Founding of New England. My Ancestors Part in that Undertaking, stated that Thomas, baptized 20 Oct 1597, and his brothers, John and Timothy Stanley, were sons of John and Susan (Lancock) Stanley. New information in a 2005 Leslie Mahler article disproves this, by locating the true records for these brothers.[1]

He married at Ashford, Kent, 3 Aug 1630, Bennett Tritton, daughter of Daniel Tritton.[1] She remarried after Thomas death to Gregory Wolterton[2]

The three brothers Thomas, Timothy and John Stanley sailed for New England. Unfortunately, John died on the journey, leaving two orphan children. The Massachusetts courts assigned one each to John's brothers. Thomas raised his nephew John Stanley. The next day, 4 Mar 1634/5, Thomas and Timothy were made freeman in Massachusetts.[3] While still in Lynn, 2 Sep 1635, he served as Deputy to General Court. "Thoms Standley, constable of Saugus, fined 10s. for absence from court," on 27 Jun 1636. Saugus was the original Native American name for the area that became Lynn.

Thomas was on the early (1639/40) property inventory and held quite a bit of land in Hartford.[4] He served on several Hartford Colony Courts.[5]

Thomas was the constable for Hartford 1643, 1648 and 1653.[6] In 1650, he broke his arm and was unable to "doe his postures in millitary discipline, vppon training days;" and so was excused from training until the court saw cause to alter the same.[7]

Evidence indicates that a difference in some religious matters caused a group of people in Hartford to withdraw and subsequently they founded Hadley in Massachusetts. Thomas Stanley went to Hadley, Massachusetts, with the first settlers, in 1659.[8] He served on the Hampshire petit jury 25 March 1662.[2] He was buried there 30 Jan 1662/3[8]

In the 1886 genealogical tome, History and Genealogy of the Montague Family of America [9] a listing and mapping of the year 1663 residents actually living in Hadley, Massachusetts from the original 59 families that had signed the 18 April 1659 agreement (page 45) to split from the church at Hartford / Wethersfield Connecticut and form Hadley Massachusetts is provided:

Thomas will, dated 19 Jan 1659, was considered by the courts to be irregular. It had no witnesses signatures, but his widow said that it was Thomas' mind and his children agreed so it was allowed. He gave his servant James Bebe £5 when his time of service was up, when Bebe should be 22, and left it to the discretion of his wife to give him another £5 at the same time, if he gives good service. He left £5 to his cousin John Standly of Farmington. He gave his son Nathaniel all his lands in Hartford and to his wife Bennett he left his land in the "New Plantation" (Hadley). His three daughter were to receive £5 each.[10] 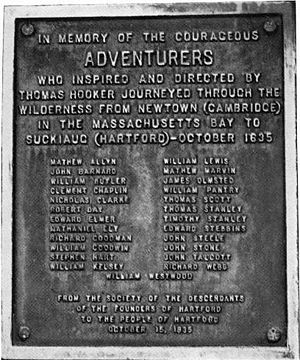 April (Dellinger) Dauenhauer
Stanley-2686 and Stanley-140 appear to represent the same person because: they have the same parents and the same death date. Note that the parents of Stantley-140 have been disproved and should be disconnected, so that the merge will bring in the correct parents. See the note on Stanley-140 and the accompanying source (TAG article of 2005) for further information.
posted Nov 10, 2015 by April (Dellinger) Dauenhauer