This person was created through the import of Wyatt, Parker, Eliker, Mosher,.ged on 24 September 2010. The following data was included in the gedcom. You may wish to edit it for readability.

Helen M. McClain, 90, died at 7:34 a.m. Saturday in Parkview Huntington Hospital, Huntington. Helen had formerly lived in Hartford City, but had been residing at Heritage Pointe in Warren. She was born in Hartford City to the late J. Earl Stanley and the late Grace May (Marshall) Stanley. Helen married Marvin T. McClain on Dec. 22, 1968 in Hartford City. He precedes her in death on July 27, 1991.

She is preceded in death by her parents; her husband; son, Duane A. Parker (deceased Oct. 2003); sister, Betty Dollar; and brothers, William Stanley and Norman Stanley.

ask our community of genealogists a question.
Sponsored Search by Ancestry.com
DNA
No known carriers of Helen's DNA have taken a DNA test. 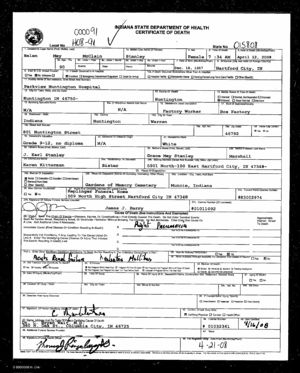 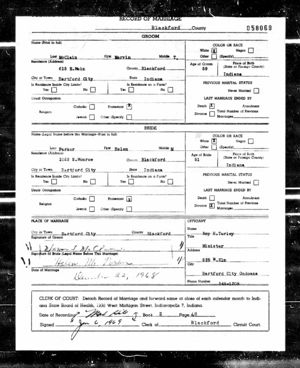 Helen is 22 degrees from Alicia Taylor, 19 degrees from Henry VIII of England and 33 degrees from Rembrandt van Rijn on our single family tree. Login to find your connection.