Jonathan Stanley was a Massachusettsan.

The Stanley Genealogy by William O. Sawtelle page 103 "Margaret LeCroix was one of the Arcadians driven from their homes in Nova Scotia by the British. She and John Stanley had their home on a point of land on Little Cranberry Island ( Isleford ). Each Mayday a maypole was erected on the point for the pleasure of their children. It became an established custom as the years went by and that point of land is still known as the Maypole, or Maypole Point." Adrian O. Stanley transcribed July 12,1998.

In 1792 the de Gregoires issued a deed for 100 Acres on Little Cranberry Island, being the west end of the Island" which John Stanley occupied in his lifetime" to Samuel Sewell, attorney for the John Stanley estate. Hancock Deeds; Book 2, page 517. Source: Islands on the Mid-Maine Coast; Volume 2; Charles B. McLane [C.1989] ; page 44.

" the estate of John Standley late of Crandberry Island in the county of Lincoln deceased intestate --- late of John Standley aforenamed now deceased, situate(d) near Little Harbor in Marblehead aforesaid and as he said deceased held the same at his death bounded southeasterly on the street, northeasterly on the street, northwesterly on the burial - ground, or common land, and southwesterly on the land now or late of the heirs of Joseph Carder deceased, or however otherwise bounded, --- " Noted: Joseph Carder, may be found as Joseph Charder Adrian O. Stanley _ May13,1999

" Barnegat was the site of the earliest settlement, the first meeting house, and Burial Hill. It is also the location of many of Marblehead’s early legends and lore." [from Marblehead 101] The estate of john Stanley was in this neighborhood, near the location of his grandfather Carder and it was near some of his stepgrandfather's Reith's holdings. Little Harbor was just a few steps away from these locations.

Jonathan (John) Stanley and his wife, Margarita Le Croix Stanley, were living on the west shore of Little Cranberry in 1769. The cellar of their home is just visible, north of the Sawtelle summer home on "the Head." They had a large family and left many descendants. [page] 280 Traditions and Records ... In the old Cadillac-Gregoire grants a large part of Little Cranberry was deeded in 1792 as follows : To Samuel Sewall, administrator of the estate of John Stanley deceased, 100 acres on the western end of the island ; to Jonathan Stanley, son of John deceased, 100 acres in middle of the island; to William Nickels 100 acres on eastern end, Marsh Head. On Great Cranberry Benjamin Spurling received 100 acres on northern end, Aaron Bunker 100 acres on southern end and "widow Margaret Stanley" [Mrs Sans Stanley] as has been noted, approximately 100 acres. _ Cranberry Isles [page] 281 Traditions and Records Southwest Harbor and Somesville by Mrs. Seth S. Thornton Published 1938 Topics History Southwest Harbor Maine and Somsville 1938 Copyright owned by Southwest Harbor Public Library

(Grave Stone) d. May 7,1783, buried at Maypole Point , L.C.I. ( Little Cranberry Island,Mount Desert Island,Maine ) "...grave stone is replica of the original one destroyed by sailors for a game." The Stanley Genealogy by William O. Sawtelle page 60.

Can you add any information on John Stanley? Please help grow his WikiTree profile. Everything you see here is a collaborative work-in-progress.

" .... John Standly culled his own fish before selling it to William Knight in 1771. Standly then charged Knight for culling services in addition to the fee for the fish. ... Separated grades of fish were then weighed before being sold. Some outfitters did their own weighing. John Standly sold Jamaica and merchantable fall fare to William Knight in 1770, and Knight charged him £0.1.6 per quintal to "weigh & Labor" 144.75 quintals. " _ THE NEW ENGLAND COD FISHING INDUSTRY AND MARITIME DIMENSIONS OFTHE AMERICAN REVOLUTION Christopher Paul Magra, PhD University of Pittsburgh, c2006

Stanley Collection: Location: HQ/ R1/U1/S4/BX/15/F8,9,10,11, Box 15 Folder 8 page 16 "Since Sands and Mary Charder Stanley had a younger son named Joseph and no Samuel it would seem that this Joseph was named for Mary Charders father Joseph, hence Mary Charter wife of Sands Stanley of Marblehead was the daughter of Joseph and Elizabeth Clark Charter b. Dec. 6, 1706." 

Islands of the Mid-Maine Coast_Mount Desert Island to Machias , by Charles B. McLane [C. 1989], pages 44 and 331 The Story of Mount Desert Island by Samuel Eliot Morison https://archive.org/details/storyofmountdese00mori/page/n54/mode/1up?q=little+cranberry&view=theater

Thank you to Sarah Ward for photo of John Stanley's grave and putting me in touch with Ted Spurling Sr.

Thank you to Ted Spurling Sr. and Ralph Stanley their help, and to Charles "Chuck" Liebow, who provided a great deal of information on the families connected to the Stanley clan.

A History of Little Cranberry Island, Maine [c. 2000] by Hugh L. Dewlley. Thanks to Hugh Dwelley for a signed copy, additional information, and a guided tour of Isleford, Maine.

ask our community of genealogists a question.
Sponsored Search by Ancestry.com
DNA Connections
It may be possible to confirm family relationships with Jonathan by comparing test results with other carriers of his Y-chromosome or his mother's mitochondrial DNA. However, there are no known yDNA or mtDNA test-takers in his direct paternal or maternal line. It is likely that these autosomal DNA test-takers will share some percentage of DNA with Jonathan: 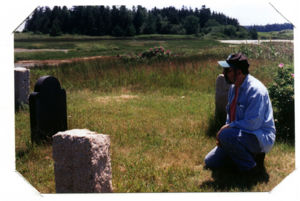 Maps of Cranberry Isles in 1776 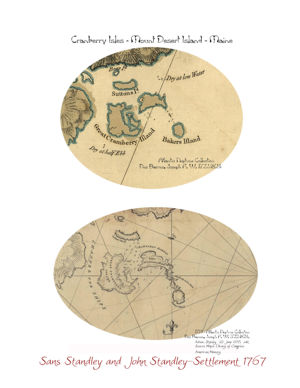 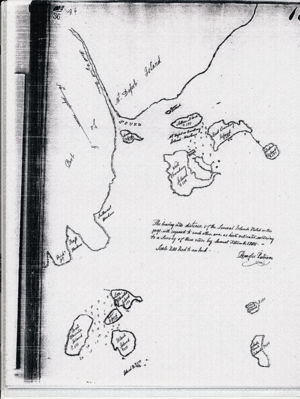 Outline Map of the Cranberry Isles, Maine with Early Settlers 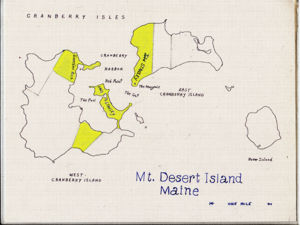 View of Mount Desert from Isleford 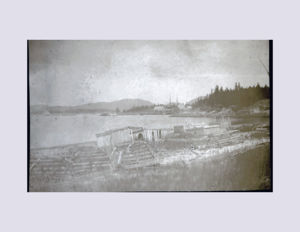