She had formerly worked with Plywood Plastics Corp. (International Paper) in Hampton, and was a member of the West End Baptist Church in Hampton.

Surviving are: one daughter, Mary Elizabeth Hull of West Columbia; one brother: John Wesley Stanley of Homestead, Florida and one sister: Katherine Crosby Stanley of Estill. There are six grandchildren, and 11 great-grandchildren and one great-grandchild. She was predeceased in death by a son: John Franklin Crosby, II.

Funeral services will be 3 p.m. Tuesday in the Chapel of PEEPLES-RHODEN FUNERAL HOME in Hampton, conducted by Rev. Jule Young and Rev. Kevin Crosby, with burial in the Browning Cemetery.

Friends may call at the Chapel in Hampton, from 6 to 8 p.m. Monday, and Tuesday until the hour of services.

The family suggests that those who wish may send memorials to the South Carolina Arthritis Foundation, P.O. Box 296, Hampton, S.C. 29924. [1]

Is Rosena your relative? Please don't go away!

ask our community of genealogists a question.
Sponsored Search by Ancestry.com
DNA
No known carriers of Rosena's DNA have taken a DNA test. 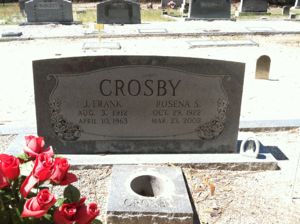