Biography below composed by great-granddaughter Shari S for FindaGrave:

Pearl, as she was always known, was the fifth child and last daughter of Charles and Stanley and Lizzie White. She was born in 1905 in Nacogdoches County but was still a young child when her parents and their six children found a permanent home in Huntington, near Lufkin, in Angelina County.

Pearl was not quite a teenager when the Spanish Flu took the lives of her two sisters Roxie and Dorothy, young women of 23 and 17. Her remaining sister and close confidant, Mattie, married soon after.

The mood of the household in those years with only Pearl and her brother Clyde left is unknown to us now, but in 1922 the family took a road trip that included traveling through Anson, Texas, far west of their home in the piney woods. While staying at an auto camp, Pearl met and soon after married Burnett Simonds. To hear Burnett's younger brother describe it, it wasn't long after the two were married that Pearl's parents confessed that the entire point of the trip was to find their 17-year-old daughter a husband.

By all accounts, Pearl was a lively young woman with a heart so warm and welcoming that even her great-grandchildren remember her fondly today. She liked baking and photography, and she loved children, caring for neighborhood children as if they were her own and showing that same motherly instinct to all her relations, be they brothers, in-laws, or distant cousins.

Pearl and Burnett had three children right away: a boy, a girl, and another boy. Life would be hard for the next decade as they traveled around Texas in search of painting work for Burnett, often doing any job - such as seasonal produce picking and temporary factory work - as the Depression grew worse. Mattie, Pearl's remaining sister and dear friend, died during this time.

By the mid-1930s the family was living in Fort Worth, where Burnett had been raised. Here they remained, albeit not always in the same place, until their three children were grown and married and the grandchildren started coming in at the end of World War II. Pearl's mother, widowed by this time, lived the last ten years of her life with the couple.

In their later years, Pearl and Burnett lived in simple retirement in Azle near Eagle Mountain Lake, their home always likely to be full of grandchildren or nieces and nephews. Burnett passed away six years before Pearl, but she continued to live in Azle, sewing toys for her infant great-grandchildren.

At the end of summer in 1974, colon cancer quickly spread to Pearl's lungs. She passed away on a Wednesday evening in late October. We still miss her.

Is Nellie your relative? Please don't go away!

ask our community of genealogists a question.
Sponsored Search by Ancestry.com
DNA Connections
It may be possible to confirm family relationships with Nellie by comparing test results with other carriers of her mitochondrial DNA. However, there are no known mtDNA test-takers in her direct maternal line. It is likely that these autosomal DNA test-takers will share DNA with Nellie: 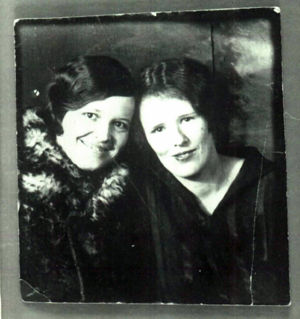