James Stanley was a South Carolinian.

James Stanley was born sometime before 1799, possibly in South Carolina. His parents are currently unknown. See research notes below.

In the 1821 Tax List for Christian County, Kentucky, James Stanley was taxed for 115 acres acres in Christian County, watercourse, Pond River one white male over 21 and one horse. Total value of taxation was $600.[1]

In the 1830 U.S. Census, James Stanley was enumerated as head of a 10 person household, including three slaves, living in Christian County, Kentucky.[3]

He was killed 13 September 1833 in Hopkins County by Drury Hafford. Drury and his brother William got into an argument with James Stanley while doing volunteer work on a road in Hopkins County, Drury struck James with a grubbing hoe, and James died twenty minutes later. See Criminal Case 701 for details. Drury and William left the state and ended up in Texas where they were joined later by their parents. Drury changed his name to "Samuel Pearce."

Birth place: The 1880 U.S. Census for his daughters Margaret and Minerva show he was born in South Carolina.[4]

Parents: His parents are currently unknown. Some researchers believe he was the son of the son of Moses Stanley and Sarah "Sally" West. Neither James or his children were named as heirs in Moses Stanley's Last Will. Moses listed his grandchildren in his Last Will, i.e., the seven children of Elizabeth Stanley (his deceased daughter, who married Amos Lacy). He also mentions the children of his other daughters, Dorcas Teague, Nancy Sisk, and Sally Harper. He does not mention the children of James Stanley and Hester Teague. If James were his son, it would be logical that Moses would mention his orphaned grandchildren in his Last Will.

Images: 4
The Murder of James Stanley 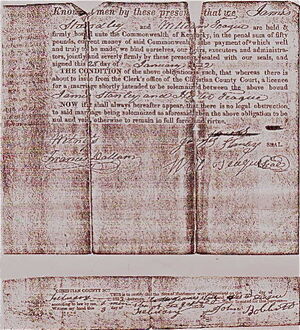 Grubbing Hoe, same type of implement that was used to kill James Stanley 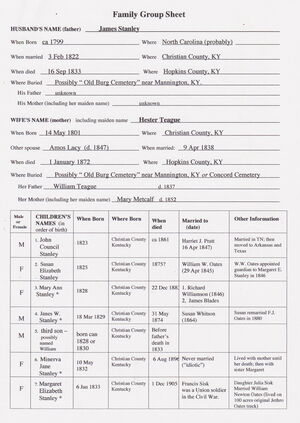