Paul Waples Stanley went to be with his Lord on Wednesday, Feb. 15, 2012, at the age of 96. Funeral service with full military honors was held Saturday, Feb. 18, 2012, at Sunset Ridge Church of Christ in Brady, Texas. Interment followed in Rest Haven Cemetery. Church minister Virgil Webb officiated and Lonnie Jameson led the congregation in singing some of Paul's favorite hymns.

Paul was born July 11, 1915, in Knox City, Texas, to Cosby Howard and Mary Margaret (Scott) Stanley. The family later moved to Stamford where Paul graduated from Stamford High School in 1933.

From 1933 to March 1941, Paul drove a truck for Waples Platter Company and Kimbell Grocery Company. During this time he began dating Signa W. Young, his future bride.

Paul W. Stanley was 25 years old when he entered the U.S. Army at Fort Bliss, Texas, on March 11, 1941. He served his country for 13 and 1/2 years; four and a half years, active duty and nine years in the Reserves. His overseas conflicts included the European Theater and five amphibious invasions (to North Africa, Sicily and Italy-Anzio) with the 3rd Division. At the beginning of the war, Lt. Stanley was in command of 60 men and later became a captain in command of a company of 200 men. Paul's honors include the Distinguished Service Cross, Silver Star, Bronze Star, Purple Heart with two Clusters, nine Battle Stars and the Combat Infantry Badge. Paul was inducted into the Officer Candidate School's Hall of Fame at Fort Benning, Ga., on September 1994.

Two weeks after Capt. Stanley returned stateside he married Signa Young April 1, 1945, (Easter Sunday) in Abilene, Texas. Paul and Signa lived in Stamford for 17 years where he was a salesman for Kimbell Grocery Company. The wholesale grocery business led his family to Tyler in 1962. For the next 35 years he was a salesman and registered investment banker with IDS.

Paul was a member of the Church of Christ. He served in Stamford as a deacon and in Tyler as an elder.

Paul and Signa moved to Brady in 2002, due to declining health and to be close to their daughter and her family. He was devoted to his wife Signa for 60 years until her passing Dec. 1, 2005.

ask our community of genealogists a question.
Sponsored Search by Ancestry.com
DNA Connections
It may be possible to confirm family relationships with Paul by comparing test results with other carriers of his Y-chromosome or his mother's mitochondrial DNA. However, there are no known yDNA or mtDNA test-takers in his direct paternal or maternal line. It is likely that these autosomal DNA test-takers will share DNA with Paul: 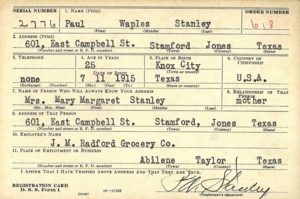 Paul is 28 degrees from Ludwig Kraayenbrink, 19 degrees from Henry VIII of England and 29 degrees from Ferdinand von Zeppelin on our single family tree. Login to find your connection.