Sam Starr was born in the Cherokee Nation, Indian Territory on November 24, 1859 to Thomas Starr and his second wife, Catherine Reese. [1] Sam is found on the 1880 Cherokee census with his parents and nine siblings. [2] Sam Starr was a Horse thief, Outlaw, Gun fighter and Bootlegger. He was a husband of the notorious American outlaw Belle Starr.

Sam and Belle married June 5, 1880, when Sam’s age was listed as 23 and Belle’s age was listed 27, but she could have been 32 years old. [3] Sam was referred to as being friend with the Youngers and the James. [4]Belle's previous husband Jim Reed had been shot by his former friend John Morris, who had been deputized to capture Reed.

Sam and Belle moved near Briartown on communal tribal land. (Sam had 52 acres called Youngers Bend, after the Younger gang. This was near Eufaula, Oklahoma. The newlyweds cleared land and settled into a comfortable cabin at Younger’s Bend, on the Canadian River about 70 miles southwest of Fort Smith, Ark.[3]Many fugitives, including Jesse James, often hid on the property. Sam and Belle formed an outlaw gang, rustling horses and bootlegging whiskey to Indians. The mastermind of this gang was Belle Starr.

Sam and Belle Starr were accused of stealing horses in July of 1882. July 31, 1882, they were charged by a grand jury for larceny in the Indian Territory. Tom Star made bail for the couple. The ‘Hanging Judge’, Isaac C. Parker, held the trial March 1883. He found Belle guilty on two counts, receiving (2) six month terms. Sam Starr was found guilty on one charge and was sentenced to 12 months. [3]They were sent to the House of Correction in Detroit, Michigan.

In 1886 Sam Starr was critically wounded after an Indian posse ambushed him. Sam Starr escaped and went to his brother's home. His brother convinced him to turn himself in. Sam Starr surrendered to authorities in October 1886 and was scheduled to stand trial in February 1887. [3]

Cherokee authorities of Oklahoma said Belle could not claim Sam’s land at Younger’s Bend. She found another man to share the rest of her life.[3]

Sponsored Search by Ancestry.com
DNA Connections
It may be possible to confirm family relationships with Sam by comparing test results with other carriers of his ancestors' Y-chromosome or mitochondrial DNA. However, there are no known yDNA or mtDNA test-takers in his direct paternal or maternal line. It is likely that these autosomal DNA test-takers will share DNA with Sam: 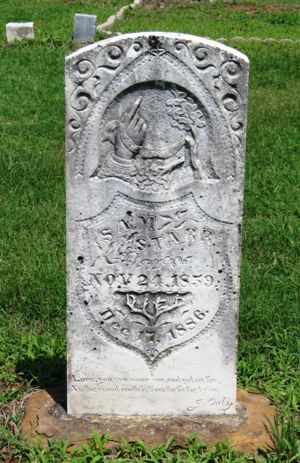 I noticed this stated he was born in 1980 this has to be a typo but should be fixed.