In 1675 Elizabeth Woodworth (Walter) bore a child out of wedlock, fathered by Robert Stetson, Jr. of Scituate. He was ordered by the court to pay her 2 sh. a week for the first three months, and afterwards 1 sh. 6 d. until the child was seven years old. Elizabeth's brother Joseph and Robert's father, Robert Stetson, agreed that the verdict was just. Documentation is in records of Plymouth Colony. Elizabeth evidently went elsewhere to live with her child, for no other trace of her has been found in Scituate or R.I. records. [4]

It is not known if she married later, but it is certain that she did not marry Robert Stetson, Jr., for he married Joanna or Deborah Brooks in 1676, dau. of William Brooks and removed shortly afterward (after the Narragansett Indian raid upon Scituate?) to Duxbury, Massachusetts (Prior to 1700). [2]

(Note: The Stetson Family sources are divided as to the name of Robert's Wife. In the Pembroke records, it records the Death of 6th child Peleg as the "son of Robert and Deborah Stetson" [5]

On 16 May 1676, the Narragansett Indian raid on Scituate burned the Robert Stetson Jr. house. The next reference we have of Robert is in Duxbury, Massachusetts (Prior to 1700). [6]

In 19 July 1700 He was deeded (as Robert Stetson of Duxborough) a valuable "River Farm" lying with and being in the township of Scituate on the easterly side of North River...being a part of that tract called the "two mile" [6]

In 1709-10 in the "division of the common lands of Duxborough" Robert Stetson's grand of one hundred acres served as one of the boundaries in laying out the new lots, and in 1711-12, when Pembroke was incorporated, Robert Stetson with at least seven children with their families were here, and with the one hundred acres (then in Duxbury) were included in the new township of Pembroke (Massachusetts)[6]

Because of the land descriptions and surveys, refering to Robert Stetson's holdings, is is certain that Robert Stetson still lived on his original grant when Pembroke was incorporated in 1712 [6].

A. A Sarah (Stetson) Bennet is also listed as the child of Thomas Stetson [7] The link here is to her profile under Thomas' family. 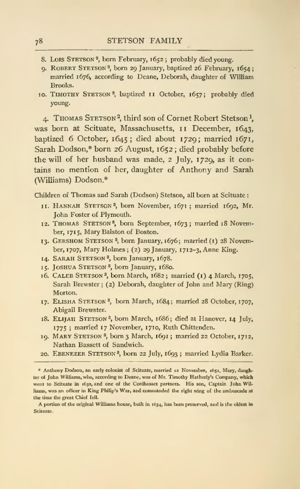