Robert (Stewart) Stewart First Duke of Albany is a member of Clan Stewart.

This profile is part of the Stewart Name Study.

Robert Stewart is the son of Robert II, King of Scots and Elizabeth Mure. He was probably born about 1339/40 and died, at age eighty, on September 3, 1420 at Stirling Castle. He is buried at Dunfermline Abbey, located in Fife, Scotland.

He married, as her fourth husband, Margaret Graham, Countess of Monteith (Papal dispensation September 9, 1361) and they had seven children. Margaret died after July 21, 1372 and before May 4, 1380.

He next married Muriella Keith, daughter of William Keith and Margaret Fraser , Papal dispensation May 4, 1380. They had four children. Muriella was dead before June 1, 1449.

While he never held the title of king he did hold equivalent power as governor.

This WikiTree profile was created through the merger and editing of multiple profiles. See the Changes page for the details of edits by Herb and others.

ask our community of genealogists a question.
Sponsored Search by Ancestry.com
DNA Connections
It may be possible to confirm family relationships with Robert by comparing test results with other carriers of his Y-chromosome or his mother's mitochondrial DNA. Y-chromosome DNA test-takers in his direct paternal line on WikiTree: 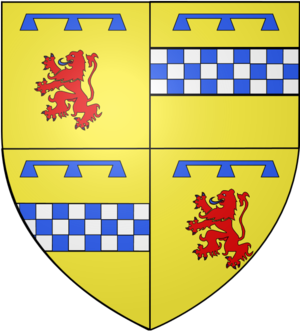 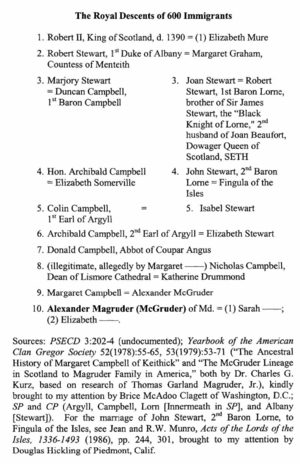 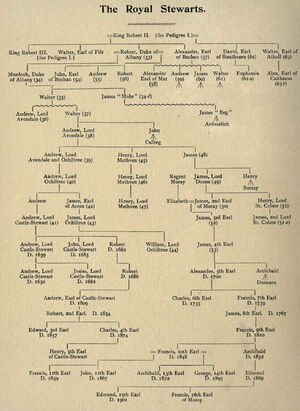 William Catambay
Per the Bio (and sources), Marjory is attached to the wrong mother. Would someone please fix that? Her mother should be Margaret Graham (Graham-632).
posted Jul 20, 2019 by William Catambay