James I Stewart is a member of the House of Stewart.

James I Stewart is a member of Clan Stewart.

James I of Scotland

James I Stewart, King of Scotland[2]

Other titles: Duke of Rothesay, Earl of Carrick

1405/6: taken prisoner by the English sailing to France shortly before death of his father, ROBERT III. Held for ransom, mainly in the Tower of London, until 5 Apr 1424.[6]

During exile, Scotland was governed by his uncle Robert, Duke of Albany until his death (1420); then by Robert's son, Murdoch.

25 May 1425: James took revenge and executed Murdoch and two of his kinsmen outside Stirling Castle.

21 Feb 1437: murdered by family members at Blackfriars Monastery in dispute over throne.[3]


Memories: 1
Enter a personal reminiscence or story.
Jonathon Myers
He is not James "The Black Knight of Lorn" Stewart [Stewart-4030] who did in fact marry Joan Beaufort before September 21, 1439 after the death of this, King James Stewart of Scotland.
posted 19 Jun 2013 by Jonathon Myers   [thank Jonathon]
Login to add a memory.
Sponsored Search by Ancestry.com
DNA Connections
It may be possible to confirm family relationships with James I by comparing test results with other carriers of his Y-chromosome or his mother's mitochondrial DNA. Y-chromosome DNA test-takers in his direct paternal line on WikiTree:

James I of Scotland Image 2 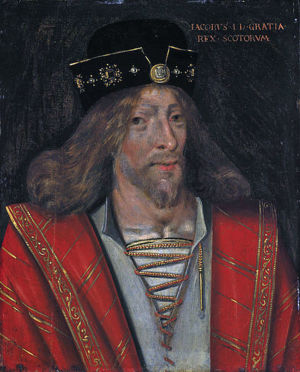 Categories: House of Stewart | Dukes of Rothesay | Prisoners of the Tower of London | This Day In History February 21 | 15th Century | Clan Stewart