[send private message]
Profile last modified 7 Dec 2022 | Created 11 Feb 2013 | Last significant change: 7 Dec 2022
18:24: Ellen Altenburg edited the Biography for Mary (Stewart) Stuart Queen of Scots (1542-1587). (Bio improvement. ) [Thank Ellen for this]
This page has been accessed 40,855 times.
THIS PROFILE IS CURRENTLY UNDER RECONSTRUCTION BY THE SCOTLAND PROJECT. PLEASE DO NOT EDIT WHILE THIS NOTICE IS IN PLACE WITHOUT FIRST COLLABORATING WITH THE PROJECT. Thank you! Altenburg-72 3 Dec 2022

Mary (Stewart) Stuart Queen of Scots is a member of the House of Stewart.

Mary (Stewart) Stuart Queen of Scots is a member of Clan Stewart.

Mary Stuart was born 8 December 1542, at Linlithgow Palace, West Lothian, Scotland. She was the daughter of James V of Scotland and his second wife Mary of Guise. She was baptised at the Church of St. Michael. She had two older brothers, James Stewart and Robert or Arthur Stewart. Both brothers died in infancy in 1541. James V died on 14 December 1542, and Mary ascended to the throne of Scotland at the age of six days.[1][2][3][4]

John Knox recorded that on hearing that his wife had given birth to a girl, James said:

This statement is in reference to his belief that the Stewarts accession to the throne was through Marjorie Bruce, and the end of the Stewart dynasty with Mary Queen of Scots. After her birth, there were rumors that she was premature, and likely not to live. However the English ambassador, Ralph Sadler, wrote ""it is as goodly a child as I have seen of her age, and as like to live." [6]

The were two claims as to who should be regent until Mary was of age. One was from Cardinal Beaton, and another by the heir to the throne, James Hamilton, 2nd Earl of Arran. Arran was chosen as regent of Mary on 22 December 1542 by Parliament.[7][8] In January 1543 he stripped Catholic Cardinal David Beaton from the office of chancellor. He announced that he was adopting the protestant faith.[9] He also welcomed the English ambassador, Sir Ralph Sadler, and indicated his support for a treaty between Scotland and England which would be the result of a marriage between the infant Mary and Prince Edward.[10]

Arran was not popular with the nobles, and at a convention at Stirling in June 1554 it was resolve that her mother, Mary of Guise, would take over regency. Arran ignored the act. As Scotland was now at war with England, it was suggested th Queen Mary be removed to France. On 12 April 1554, Arran consented to abdicate.

Mary was married three times, with the last union eventually leading to her downfall.

On 24 Apr 1558 Mary I, Queen of Scots married Dauphin Francois (later to become Francois II of France) at Notre Dame Cathedral, Paris, France.[11] Francis was the eldest son of French King Henry II and Catherine de Medicis. In 1559, Mary's husband was crowned Francis II, making Mary both the queen of Scotland and France's queen consort. Francis died from an ear infection the year after he ascended to the throne, leaving Mary a widow at age 18.

Following Francis’s death, Mary returned to Scotland from France in 1561. By that time, John Knox's influence had changed Scotland's official religion from Catholicism to Protestantism.

As a Roman Catholic raised in France, Mary found herself an outsider. However, with help from her illegitimate half-brother, James, Earl of Moray, Mary managed to rule while creating an atmosphere of religious tolerance.

In 1565 Mary married her second husband, her cousin, Henry Stuart Lord Darnley, a grandson of Margaret Tudor. Mary uniting with a Tudor infuriated Elizabeth Tudor. Her marriage to Darnley also turned Mary's half-brother against her. Darnley’s ruthless ambition caused problems. In 1566 Darnley and a group of Protestant nobles viciously murdered David Rizzio, Mary's Italian secretary, stabbing him 56 times as a pregnant Mary looked on. Though she gave birth to their son a few months later, she no longer wished to be married to Darnley. When Darnley was mysteriously killed following an explosion at Kirk o' Field, outside Edinburgh, in February 1567, foul play was suspected. Mary's involvement is unclear.

In May 1567 Mary married her third husband, James Hepburn, Earl of Bothwell, the main suspect in her previous husband Darnley’s murder. Over the years, Bothwell had become a close confidant of Mary and was said to exert great influence over her. He also had his own ambitions to become king, and he had abducted Mary and held her captive in Dunbar Castle. Mary’s marriage with Bothwell, just three months after Darnley’s murder, made the Scottish nobility rise against her. Bothwell went into exile, where he was arrested and held captive until his death. In July 1567, Mary was forced to abdicate the throne in Scotland in favour of her infant son. She was imprisoned in Lochleven Castle.

On 19 Jun 1566, Mary gave birth to James Charles Stuart, the future James VI of Scotland and James I of England. James was Mary’s only child, conceived with her second husband, Henry Stewart.

Claim to the English Throne and Imprisonment by Elizabeth I

As the great-granddaughter of King Henry VII, Mary had a strong claim to the English throne. Her French father-in-law, Henry II, made this claim on her behalf. But Mary never became the queen of England.

In November 1558, Henry VIII's daughter, Elizabeth Tudor, became Queen Elizabeth I of England following the death of her sister, Mary Tudor. Many Roman Catholics did not recognize the validity of Henry VIII's marriage to Elizabeth's mother, Anne Boleyn, and they considered Elizabeth's rule to be illegitimate.

In 1568, Mary escaped from Lochleven Castle, where she was imprisoned by the Scottish nobility for her unseemly marriage with Bothwell. She raised an army but was soon defeated. She fled to England, where she sought Elizabeth's protection. Instead of helping her cousin, the queen imprisoned Mary. Mary's captivity would last for 19 years.[12]

English Catholics plotted to get Mary, a Catholic herself, onto the throne by assassinating Elizabeth. Mary was involved in several plots to raise the Catholic North of England in rebellion. Mary corresponded with one such plotter, Anthony Babington. When Elizabeth's spymaster uncovered the letters in 1586, Mary was brought to trial. She was found guilty of treason and condemned to death by a court of 40 noblemen.

After Elizabeth signed her cousin's death warrant for treason, Mary was executed 8 Feb 1587 in Fotheringhay Castle, Northamptonshire. She was 44 years old. Elizabeth had Mary buried at Peterborough Cathedral. After Mary's son became King James I of England, he moved his mother's body to Westminster Abbey in 1612, only thirty feet from the grave of her cousin Elizabeth I.

Images: 13
Mary, Queen of Scots, by an Artist of the Clouet School. 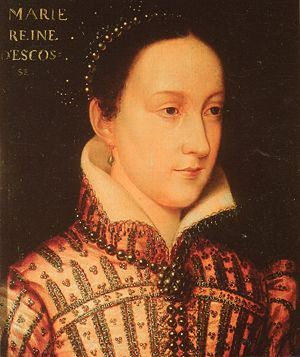 Mary, Queen of Scots, by an Unknown Artist. 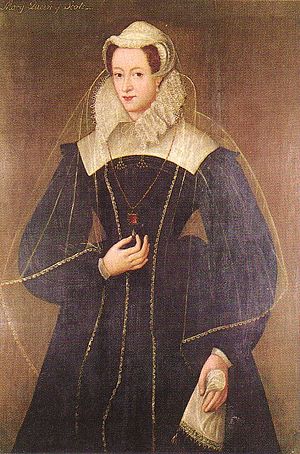 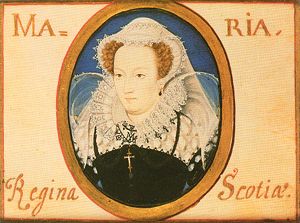 Mary, Queen of Scots, in a Sketch by Francois Clouet. 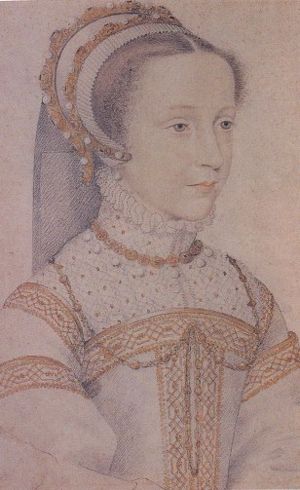 Francis II and Mary, Queen of Scots, from a Book of Hours Portrait. 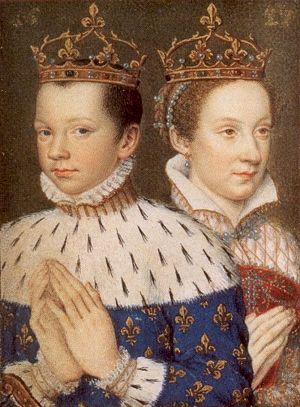 Ellen Altenburg
I'm going to be working on this profile for the Scotland Projects Managed Profiles team in the near future. Will be adding research notes as I am finishing up on her father's profile.
posted Dec 01, 2022 by Ellen Altenburg

Lisa (Kelsey) Murphy
April 24, 1558 Mary I, Queen of Scots, married Dauphin Francois, later to become Francois II of France at Notre Dame Cathedral. This information is on the page for Notre Dame. Please can the information be added and

be put in for the "Notre Dame" to connect the link?

James IV, King of Scots, was slain at the Battle of Flodden 9 Sept. 1513. His widow, Margaret, married (2nd) 6 August 1514 (as his 2nd wife) Archibald Douglas, son of George Douglas, by Elizabeth, daughter of John Drummond. He was born about 1490. They had one daughter, Margaret. They were divorced 11 March 1527/8. Margaret married (3rd) Henry Stewart. He was born about 1495. They had no issue. Margaret Tudor, Queen Dowager of Scotland, died 18 October 1541. Following her death, Henry [Stewart] married (2nd) his mistress, Janet Stewart.