Frederick was born in 1887 in McNab Township, Renfrew, Ontario. He was the son of Edward Stielow and Hannah Spieker. Fred as he was called was already training as a tailor in 1901. In 1921 he was working as a tailor and his income was $1,100 for the year. Fred never married, instead living with his parents. His father had died in 1940 and Fred was the informant for the death record. Fred died in the Ottawa Civil Hospital in 1942 after complications from ulcers. He had surgery May 12th but died May 27th. The funeral was held in the residence of his sister Mrs. Minnie Loock in Mansfield, Renfrew County. Fred was buried in Arnprior.

Fred began his apprenticeship as a tailor by age 14. The process takes 2 to 6 years to complete. Arnprior, a small town near the Canadian capital city of Ottawa, had some merchant tailor shops where Fred could work. If he found a position in Ottawa the work would pay more but there was some friction between shop owners and their tailors due to the development of unions and strikes.

25 Mar 1907 The Ottawa Journal: STRIKE. Four Sparks St. Stores Affected. Employees want more pay increase. "We are paid lower here than any other city in Canada," said one of the strikers. "For pants and vests the scale is way below. Of course in the busy season we make good wages but we have to work long hours for it--twelve and fifteen hours a day."

There was competition from the new ready-made clothing and imports. In 1912 a suit could be purchased for $7.50 at Murphy Gamble Limited and the "Business Man's Lunch" was served for 50 cents. (Ottawa Journal 23 May 1912).

Fred's brother August Stielow, who had moved to Aberdeen, Washington, was also a tailor. It was an occupation that was not as necessary as it had been in previous centuries. Once master tailors with nine years of training could cut patterns and sew garments that ranged from simple to extravagant that were flattering to the buyer and comfortable to wear. One size did not fit all. Five sizes did not fit all. These garments were a work of art, designed to fit one body. "The old saying The Tailor Makes the Man, is still true and the reason is easily found. He is skilled in the art of designing, studies your peculiarities, cuts your clothes to cover all your defects..." (The Ottawa Journal, 21 July 1928, full page ad to showcase merchant tailors and custom-made clothing).

When Fred died in 1942 the world and tailoring were radically different than when he began his career in 1900.


Memories: 1
Enter a personal reminiscence or story.
Pat Miller
Occupation Tailor: Fred's chosen occupation as a tailor, had him training for the job by age 14. His brother August Stielow who emigrated to Washington State was also a tailor. These were the uncles of Evelyn Stielow (daughter of Charles Stielow) and she said there was an earlier tailor who had a shop in Berlin, Germany. Turned out to be on the other side of the family, the Loock family. Evelyn's mother was Mary Loock and it was her family that had men working as Tailors (Master Tailors) in Berlin in the 1800's. It is no surprise Evelyn was very good at sewing.
posted 12 Apr 2020 by Pat Miller   [thank Pat]
Login to add a memory.
Is Frederick your ancestor? Please don't go away!

ask our community of genealogists a question.
Sponsored Search by Ancestry.com
DNA Connections
It may be possible to confirm family relationships with Frederick by comparing test results with other carriers of his ancestors' Y-chromosome or mitochondrial DNA. However, there are no known yDNA or mtDNA test-takers in his direct paternal or maternal line. It is likely that these autosomal DNA test-takers will share some percentage of DNA with Frederick: 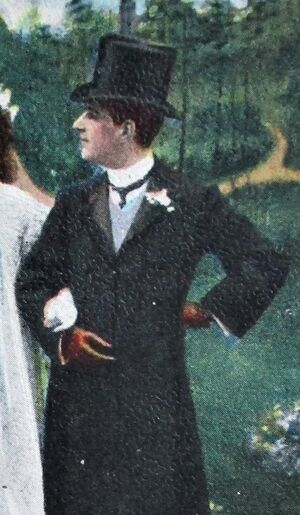