Charles was born in 1842. He is the son of Lyman Stocking and Elizabeth Hendrickson. Spouse was Della. Eight days after his service and discharge from the 105th O. V. I., he enlisted as a hospital steward and served for the remainder of the war.

From The Story of a Thousand

The Rev. Dr. Chas. H. was b. in Hambden, O. He early developed a rare musical taste and facility, and under skillful professors of repute, he turned his talents to such practical use that he was paid, for the most part, the cost of his literary and academic education. At seventeen years of age, he was teaching at Kirtland, O., and a year later, while a student in the Willoughby Institute, he was called to the ministry of the M. E. Church. Two years later he enlisted in Co. E Ohio Infantry for three years or the war; was wounded at the Battle of Perryville, Ky., October 8, 1862, and after four months of suffering in hospital, was honorably discharged on account of physical disability. In December, 1864, he entered the sophomore class of Allegheny College, Meadville, Pa., where he took the “Hunter Prize” for the best essay, and the “Painter Prize” for the best declamation; was graduated in June, 1866, entered the Garrett Biblical Institute at Evanston, Ill., and received the degree of B. D. in October 1868.

His first charge as settled pastor was at Marysville, Mo., and his subsequent pastorates have been successively at St. Joseph, Mo., Chillicothe, Mo., East Cleveland, Massillon, Wooster, Gallion and Elyria, O.; Burlington, Iowa, Duluth, Minn., St. Joseph and St. Louis, Mo., and Youngstown, O. The honorary degree of Doctor of Divinity was conferred on him, May 8, 1890, by the trustees of Garrett Biblical Institute, Evanston, Ill.

Dr. Stocking has utilized his musical gifts and culture for the benefit of the work of religion all over the country. In 1882 he associated himself with the Revs. George L. Hanawalt, Thos. C. Warner, and L. N. Baker in the organization of the “North Ohio Conference Quartette,” which has sung to thousands upon thousands, at with remarkable effect at the Lakeside, Lancaster, Baltimore, and Ocean Grove (N. J.) camp-meetings; at the Epworth League, Chattanooga, Tenn., at Armory Hall in Philadelphia, and at the dedication services of the Belmont Ave. Church, Youngstown, O. On the death of Dr. Warner, his place was filled by the first bass of the Missouri Conference.

Dr. Stocking Is an enthusiastic member of the G. A. R., and has served as an active and laborious chaplain to the various posts at which his ministerial duties have called him. A self-made man, gifted beyond most of his brethren with those forces and graces which, when rightly utilized, make a man a controlling power in any community, he has made a record for citizenship, patriotism, and religion that will not be forgotten.

Wife Adelia Medora, was m. to Dr. Stocking at Belvidere, Ill., when scarcely eighteen years of age, and her record is that of a devoted, self-sacrificing and loving wife and mother.

Son David W. graduated from the high school at Duluth in June, 1891; served in the Spanish War, and is now a vessel broker in Duluth.

Son Lyman C. graduated from the same school in 1892; from Hamlins University, St. Paul, in 1896, and from the Philadelphia Medical College in 1899, and is now a practicing physician in St. Louis, Mo.

“The Story of a Much-Traveled Methodist Preacher as Told By Himself” by Charles Hendrickson Stocking, manuscript given to the Willoughby public library about 1928 by the family.[3]

The 12-year-old son of Rev. C. H. Stocking, pastor of the First Methodist church, of Duluth, died Friday morning of diphtheria. Two days previous, his five-weeks-old son died of the same disease, and on October 16th last, his 16-year-old daughter died of diphtheria. [4]

Clergyman Is Suddenly Stricken In Lobby Of Hotel In Chicago.

Was Well-Known In Baltimore, Where He Had Spent Winters.

The Rev. Dr. Charles H. Stocking, 83 years old, a retired Methodist minister, who for the last six years had been spending his winters in Baltimore, died suddenly yesterday in Chicago, while en route from this city to the home of a son in Duluth, Minn., according to a dispatch from Chicago.

Dr. Stocking, whose home was at 1623 Bolton street, was stricken in the lobby of the Fort Dearborn Hotel and died a few minutes after he was removed to his room. With him at the time was his son, Dr. Lyman C. Stocking, a St. Louis physician, who was accompanying him on the trip to Duluth. The aged minister left Baltimore Thursday afternoon.

Although he retired from the ministry four years ago after a service of fifty-four years in the Methodist Episcopal Church, Dr. Stocking had been in excellent health until the winter just past and had preached in various Baltimore pulpits on numerous occasions. His last official charge was in Wickliffe, Ohio.

At the time of his death he was chorister of the Grand Army of the Republic, Department of Ohio, and formerly had been the department chaplain. He was also chaplain of the Society of the Army of the Cumberland. For many years he had been a Mason, being affiliated more recently with the Doric Lodge, Baltimore.

Will Be Buried In Ohio.

Dr. Stocking will be buried in the family plot at Willoughby, Ohio. He is survived by his widow, Mrs. Della W. Stocking, and two daughters, Mrs. Vernon Lynch and Mrs. Amos R. Koontz, and two sons, Dr. Stocking and David W. Stocking, to whose home he was going when he died.

Dr. Stocking was born in Hambden, Ohio. He received his early education in the Ohio public schools and at Allegheny College, Meadville, Pa. His theological training was received at the Garrett Biblical Institute, Evanston, Ind. While actively engaged in the ministry he served churches in Ohio, Missouri, Illinois and Minnesota.

Dr. Stocking was well known to many Baltimore Methodists with whom he worked and worshipped during his annual winter visits. He was known especially for his health and vigor for one of such advanced age. Frequently he told his friends that he attributed his longevity to “Faith in God and man, long walks in the open, work in the garden and association with children.”

He was a philosopher of the optimistic type, contending in various public utterances that the world is growing better steadily and that there was neve such a splendid generation of young people as that of the present. He was an ardent advocate of church unity, explaining that it was unity of spirit to which he looked forward rather than organic union of the denominations. [5] 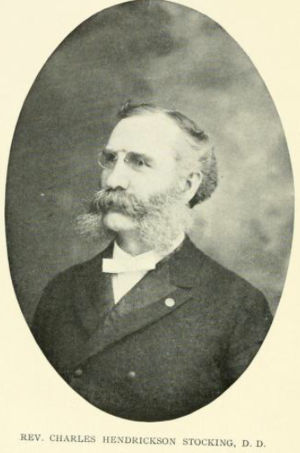 Charles is 20 degrees from Peter Roberts, 12 degrees from Emma Smith and 17 degrees from Henry VIII of England on our single family tree. Login to find your connection.