Drahomíra was a princess of the Stodorans also known as Hevelli or Hevellians, a Slavic tribe occupying Stodor,[1] an area around Brandenburg in what is today Eastern Germany, from the 8th century onwards. She was born around 890 as the daughter of an unknown Stodoran prince. About 906 she married Vratislav I, duke of Bohemia.[2] They had at least six children, including Wenceslas, Boleslav and Přibislava.[3] Spytihněv is considered another possible son who must have died in childhood, and some historians speculate that Střezislava, the wife of Slavník, founder of the Slavník dynasty was one of her other unnamed daughters.[4]


After her husband's death in 921 she became regent of Bohemia until her oldest son Wenceslas reached the age of majority in 924 or 925. Her mother-in-law Ludmila, however, was put in charge of educating her sons. This situation led to considerable enmity between her and Ludmila, worsened by apparently different political allegiances of the two. Bohemia had been aligned with Arnulf, duke of Bavaria against the Saxon Henry the Fowler, but in 921 Arnulf recognized the sovereignty of Henry putting Bohemia in a bind. Apparently Ludmila supported a rapprochement with Saxony whereas Drahomíra opposed such a move. Ultimately these differences ended in the murder of [[Pšov-3|Ludmila], instigated by Drahomíra.[5]

When Wenceslas came to power he sent his mother into exile, though he recalled her again in 925. After Wenceslas was killed in September 929 or 935 by a group of nobles allied to his brother Boleslav, she fled to the Chorvati. This tribe is only mentioned three times in historical sources, one of which is the source mentioning her exile there.[6]

Sponsored Search by Ancestry.com
DNA
No known carriers of Drahomíra's DNA have taken a DNA test. 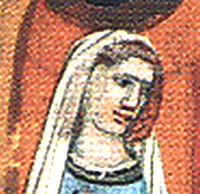 Helmut Jungschaffer
Hevellien-1 and Stoder-1 appear to represent the same person because: Vratislav historically had only 1 wife. Birth and death dates are the same, Hevellien is the French name for Stodor.
posted Nov 21, 2014 by Helmut Jungschaffer