Albert was born in Mansfield, Connecticut.

He married Marilla in Mansfield on December 6, 1840. (This is based on records of Rebecca (Bartlett) Nally.)[1]

Albert Storrs was a farmer who lived near the Baptist Church in Mansfield Center. "He is a pleasant man and a good neighbor, and has kindly assisted me about his branch of the family." [2]

In the 1860 Census, he appears along with his wife, his father-in-law and his two sons.[3]

In the 1870 Census he is still living in Mansfield with his family along with a servant and a man listed as insane.[4]

He died on June 13, 1885.[5] His son Edgar's family, Edgar's wife [Gilbert-1|Annie]], and their baby daughter Ada May, were living with Albert and Marilla at the time of Albert's death. He is buried in Spring Hill Cemetary. [Note: This part of Mansfield was called Spring Hill, and the church is now known as the Spring Hill Baptist Church.] 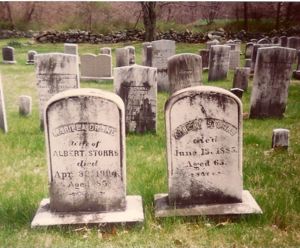