Mervyn Herbert Nevil Story Maskelyne (3 September 1823 – 20 May 1911) was an English geologist and politician.

Educated at Wadham College, Oxford, Maskelyne taught mineralogy and chemistry at Oxford from 1851, before becoming a professor of mineralogy, 1856-95. He was Keeper of Minerals at the British Museum from 1857 to 1880, he was made an honorary Fellow of Wadham in 1873.

Maskelyne was also a pioneer of photography and an associate of Fox Talbot.

The meteoritic mineral maskelynite was named after him.

Nevil was the eldest son of Antony Mervin Reeve Story and Margaret Maskelyne, the daughter of the Astronomer Royal, Nevil Maskelyne, the family adopted the name of Maskelyne on Nevil's coming of age as they had inherited that family's estate at Basset Down in Wiltshire.

Is Mervin your ancestor? Please don't go away!

ask our community of genealogists a question.
Sponsored Search by Ancestry.com
DNA
No known carriers of Mervin's DNA have taken a DNA test. 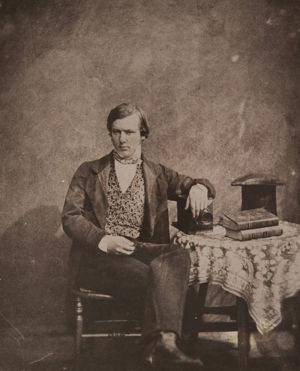