1630 -- Judith, with children Mary Denman and William Smead, sailed on the "Mary and John" (son John Denman emigrated separately to Bermuda in 1635) [3], as part of the Winthrop fleet.[4]

Judith's two brothers (Israel and Thomas) sailed in another ship in the Winthrop fleet. [5]

The following family members [6] are listed as sailing with Winthrop's Fleet:

Excerpt from The Great Migration Begins

"Two sisters of Thomas and Israel [Stoughton] also came to New England. Judith, who married first Henry {sic} Denman and second _____ Smead became a resident of Dorchester [TAG 29:198, 41:30-35]. Kiepura did not believe that Judith was a sister of Thomas and Israel, but Jacobus did. Neither of these researchers was aware of the baptism at Burstead Magna, Essex, on 3 July 1599 of "Judith Throughtone ... the daughter of Thomas preacher of the word of God"; in other diocesan records we find that the minister at Burstead Magna was assisted from 1594 until 1600 by "Thomas Stawghton," these being the "lost" years between his ministry at Naughton, Suffolk, and at Great Coggeshall, Essex. Thus, Israel and Thomas did have a sister Judith, and so the doubts expressed by Kiepura are relieved. [8]

Excerpt from History of Deerfield

Sponsored Search by Ancestry.com
DNA
No known carriers of Judith's DNA have taken a DNA test. 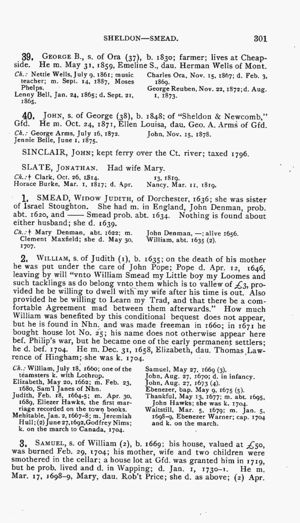 Will of Judith Smead 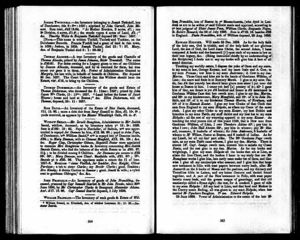 Victoria (VanAllen) DeLuca
Should Judith Stoughton be included in the Puritan Great Migration Project? She arrived in the American Colonies before 1640.