On Wednesday morning at the home, which has been the scene of so many happy events and which is filled with memories of Christian parents, scores of friends gathered to pay final tribute to Mrs. Mattie Stovall Morrison, who passed away before daybreak Tuesday. Mrs. Morrison, widow of H L Morrison, Sr., had been ill for more than a year and her condition became critical ten days ago. The simple service was conducted by the Rev. L O Elmore, pastor of the Presbyterian Church, of which Mrs. Morrison had long been a devout member. Burial was in the I O O F Cemetery, with Barry-Chandler in charge.

Mrs. Morrison, who was 71 years old, had lived all her life in Okolona. She was a member of a prominent pioneer family, being a daughter of the late Captain and Mrs. W G Stovall. About fifty years ago she was married to Mr. Morrison, who died in 1920. Deeply spiritual, gracious and gentle, Mrs. Morrison was beloved by her family and friends. She possessed a brilliant mind and was a gifted musician. Until her last illness she was active in church and club work. For a number of years she served as organist and choir director in her church, and several times was president of the Woman's Auxiliary and also held other offices in that organization. She was a charter member of the Lanier Club, one of the pioneer clubs of the Mississippi Federation.

Is Mattie your ancestor? Please don't go away!

ask our community of genealogists a question.
Sponsored Search by Ancestry.com
DNA Connections
It may be possible to confirm family relationships with Mattie by comparing test results with other carriers of her ancestors' mitochondrial DNA. However, there are no known mtDNA test-takers in her direct maternal line. It is likely that these autosomal DNA test-takers will share some percentage of DNA with Mattie: 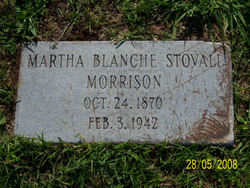