Mary Gertrude Schust (née Stritzel) was born in July 1883 in Port Clinton, Ottawa, Ohio, and was the first born in the USA and fifth of thirteen children overall to Gottscheer immigrants Johann Stritzl of Oberblaschowitz and Barbara Schober of Reuter.[1][2][3] She and her siblings were raised primarily in nearby Portage Township.

She was married to Matt Schust (né Mathias Schusterschitz) on 28 September 1901 in Blocton, Bibb, Alabama, with whom she had seven children (five living to adulthood).[4][5][6]

Mary passed away on 4 December 1912 in Blocton at the age of 29 due to unknown reasons and was buried in an unmarked grave two days later in Mt. Carmel Cemetery.[7] 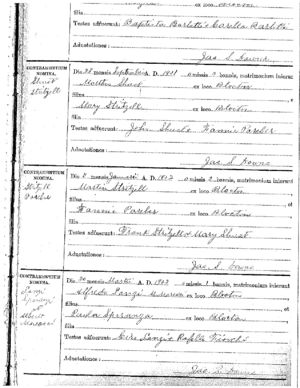