Henry Stuart is a member of the House of Stuart.

Henry was the fourth son and eighth child of Charles I, King of England and Scotland, and his wife, Henrietta Maria, Princess of France. He was born at Oatlands, Surrey[1], on 8 July 1640 and baptised there on 22 July that same year.[2]

During the civil war, he was captured by the Parliamentarians along with his sister Elizabeth and imprisoned first in White Tower, Tower of London and then in Carisbrooke Castle, Isle of Wight. They were allowed to visit their father the day before his execution.[5] After Elizabeth died in September 1650, Henry was released and joined his brother Charles II in exile in The Hague[6] and/or his mother and sister in Paris.[7]

He probably accompanied his brother Charles II on his trimphal return to London on 29 May 1660,[9] and although underage, sat in the House of Lords as Duke of Gloucester on 31 May 1660. He was appointed Ranger of Hyde Park in July 1660, but died of smallpox on 13 September 1660 at Whitehall.[10] He was buried in the South Side of the King Henry VII Chapel in Westminster Abbey on 21 September 1660. [11]

The Wikipedia article for Henry Stuart, Duke of Gloucester has extensive details about his imprisonment and period of exile, but as there are no sources quoted in that section of his biography, it is unclear whether it is exact.

ask our community of genealogists a question.
Sponsored Search by Ancestry.com
DNA Connections
It may be possible to confirm family relationships with Henry by comparing test results with other carriers of his ancestors' Y-chromosome or mitochondrial DNA. Y-chromosome DNA test-takers in his direct paternal line on WikiTree: Mitochondrial DNA test-takers in the direct maternal line: 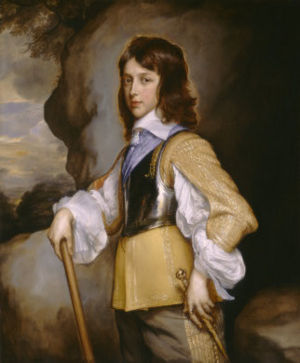 Laura DeSpain
Hi Sylvia, his name was Henry Stuart, his title was the "Duke of Gloucester". It is listed correctly, thank you for being interested in his profile.