Mary II Stuart is a member of the House of Stuart.

Mary II was joint Sovereign of England, Scotland and Ireland alongside her husband and first cousin Willem of Orange, known in England as King William (III and II). She reigned from 1689 until her death in 1694.

Heir to the Throne

Mary Stuart was born 30 April 1662 at St James Palace, the eldest daughter of James Duke of York, younger brother of King Charles II and heir presumptive to his throne, as Charles had no legitimate children of his own. Her mother was Anne Hyde, daughter of Charles' Chancellor Edward Hyde, Earl of Clarendon.[1] James was a fond father to his young daughter, as attested by Samuel Pepys, who saw them playing.[2]

Her education was cursory. As James' conversion to Catholicism became known, the king ensured his daughters a protestant upbringing under Lady Frances Villiers as their governess ,[3] where her teaching was primarily in religion. Other subjects were those generally known later as "female accomplishments," e.g. languages, drawing and dancing. Mary's religious convictions grew ever stronger throughout her life.

As it became increasingly clear that Mary was likely to become next in the line of succession, with James failing to produce a surviving son, the prospects of her marriage had political/religious implications. While both James and Charles would have preferred a French alliance (Charles had been secretly accepting money from France's King Louis XIV) they defaulted to a protestant marriage to placate the protestant Parliament. Thus on 4 November 1677 the fifteen-year-old Mary was given in marriage to her cousin Willem, Stadtholder of the United Provinces of the Netherlands.[4] [3] [5]

The marriage did not begin happily and it did not greatly improve over the years, although Mary was always the dutiful wife, as decreed by religion. Willem seems to have been a cold and distant husband. His single obsession was the threat of France's Louis XIV to the Netherlands. Mary complained that he never dined with her.[3] There were conjugal relations between them, as Mary appears to have miscarried at least three pregnancies, but the union produced no children. Willem apparently took Lady Frances' daughter, Mary's maid-of-honor Elizabeth Villiers, as his long-term mistress.[3]

Mary appears to have been in want of affection and companionship. Her only other family member was her younger sister Anne, but even before Mary's marriage, Anne was wholly in the thrall of the ambitious courtier [[Jennings-1815|Sarah Churchill], who was eventually the cause of a rift between the sisters.[3]

Willem had never liked Mary's father or uncle, as they had fought against the Netherlands and become allies of the French. [6]In February 1685, James succeeded to the English throne. Mary soon had cause to complain that her father "preferred to join with the king of France against my husband."[7] Her maternal uncles were dismissed from office and replaced with Catholics.[8]

On 10 June 1688, James' queen gave birth to a son, who would now become a Catholic next in the succession, rather than Mary.[1] Mary was convinced by the rumors, certainly promulgated by William, that the child was a Catholic hoax.[9]

Willem was now actively conspiring with the English opposition to James. [10] [11] Mary was forced to choose between her father and her husband, and she chose Willem. She repudiated her own sole right to the throne, promising Willem that he, as her husband, would always rule, asking only for affection in return: "that she would be no more but his wife, and that she would do all that lay in her power to make him king for life."[5] It may have been that he required such a promise from her before embarking on his expedition to take the English throne, fearing that Parliament might name her sole monarch and leave him as a mere consort. She rejected all suggestions for this.[3]

When Willem invaded England, Mary's family deserted James - her sister Anne and her husband, her maternal uncles. Her father never forgave her.[3] During this time, Mary turned increasingly to prayer. [3]

As joint monarch of England, Scotland and Ireland, Mary was regularly her husband's viceroy when he was away on campaign - as he was every year. Willem could not have had a more loyal subordinate. In 1690, her uncle Henry Hyde, 2nd Earl of Clarendon, was discovered in a treasonous correspondence with the exiled James, and Mary did not hesitate to consign him to the Tower.[12] [5]

Her relationship with her sister Anne continued to deteriorate, still owing primarily to the influence of Sarah Churchill on Anne. Mary believed that Churchill and her husband were colluding with members of the opposition in government for their advantage. She demanded that Anne dismiss her favorite; Anne refused and left the court.[3] [13]

There was one field which Willem left largely to Mary: the Anglican church and preferments to church office. This was a matter of great interest to Mary, whose views were decidedly puritan. She replaced the sung service in the Royal Chapel with an afternoon sermon, a measure which offended the high church party preferred by her sister Anne.[3] She enforced laws against vice and immorality, as well as the desecration of Sunday, and promoted public and private charities, notably the relief of protestant refugees from France and the Royal Hospital for Seamen at Greenwich. She founded William and Mary College in Williamsburg Virginia for the training of Anglican minsters. These institutions were her lasting legacy.

In December 1694, she succumbed to smallpox, the disease that had cut down so many of her family. She died on 28 December after receiving the sacrament, and was buried 5 March at Westminster Abbey. She had lived only to the age of 32.[3]

Willem, it is reported, was "violent" in his grief.[3] Mary had apparently, on her deathbed, asked him to sever his relationship with Elizabeth Villiers, and after her death, he did so.[14] He continued to rule England, Scotland and Ireland as king until his death in 1702. He never remarried, and died with no direct heirs to the title "Prince of Orange."[15] 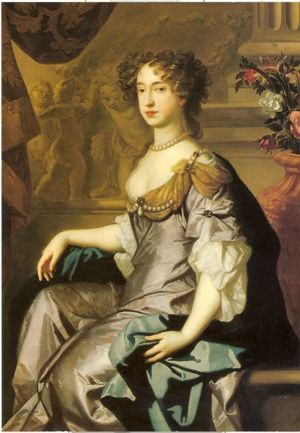 Bob Fields
Stuart-987 and Stuart-21 appear to represent the same person because: Dates and father and husband match exactly. This is Queen Mary II of England, wife of King William II. Wikipedia says she was the daughter of Anne Hyde, not Arabella Churchill.
posted Dec 28, 2014 by Bob Fields