Isabella Stuart is a member of the House of Stuart.

Isabella Stuart was a member of the aristocracy in British Isles.

Isabella, was the sixth daughter of James II and the second with his second wife Mary of Modena and was born at five minutes to eight in the morning of 18 August 1676 (28 August, new style) at St James Palace.

As her father was Duke of York, at the time of her birth, she was known as Princess Isabella of York. Her godparents were Duchess of Monmouth, Countess of Peterborough, and the Earl of Danby (later Duke of Leeds), and her governess was Lady Frances Villiers.

She was a beautiful but delicate child and died young on 2 March[1] 1681 at St James Palace, and was buried in the vault of Mary Queen of Scots at Westminster Abbey on 4 March 1681.

Is Isabella your ancestor? Please don't go away!

ask our community of genealogists a question.
Sponsored Search by Ancestry.com
DNA
No known carriers of Isabella's ancestors' DNA have taken a DNA test. 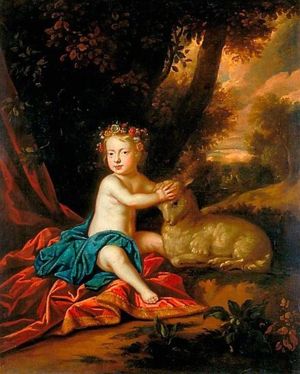