Charles II Stuart is a member of the House of Stuart.

Charles II (29 May 1630 – 6 February 1685), second but eldest surviving child of Charles I and Queen Henrietta Maria, was monarch of the three kingdoms of England, Scotland, and Ireland.

Charles II's father, Charles I, was executed at Whitehall on 30 January 1649, at the climax of the English Civil War. Although the Parliament of Scotland proclaimed Charles II King on 5 February 1649, England entered the period known as the English Interregnum or the English Commonwealth, and the country was a de facto republic, led by Oliver Cromwell. Cromwell defeated Charles II at the Battle of Worcester on 3 September 1651, and Charles fled to mainland Europe. Cromwell became virtual dictator of England, Scotland and Ireland, and Charles spent the next nine years in exile in France, the Dutch Republic, and the Spanish Netherlands.

A political crisis that followed the death of Cromwell in 1658 resulted in the restoration of the monarchy, and Charles was invited to return to Britain. On 29 May 1660, his 30th birthday, he was received in London to public acclaim. After 1660, all legal documents were dated as if he had succeeded his father as king in 1649.

Charles was one of the most popular and beloved kings of England, known as the Merry Monarch, in reference to both the liveliness and hedonism of his court and the general relief at the return to normality after over a decade of rule by Cromwell and the Puritans. Charles's wife, Catherine of Braganza, bore no live children, but Charles acknowledged at least twelve illegitimate children by various mistresses. He was succeeded by his brother James.

Charleston County, South Carolina is named in his honor, as is Kings County (Brooklyn), New York. 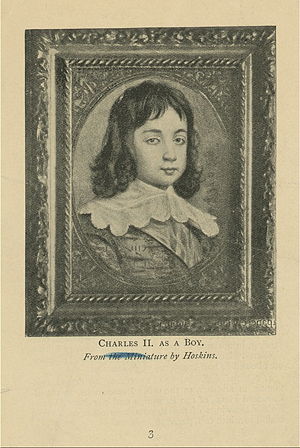 Charles II as a young man. 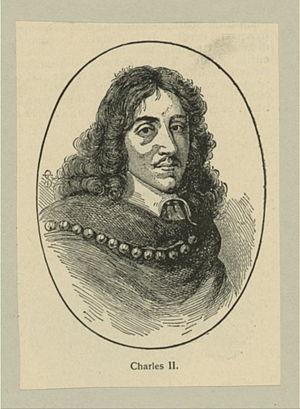 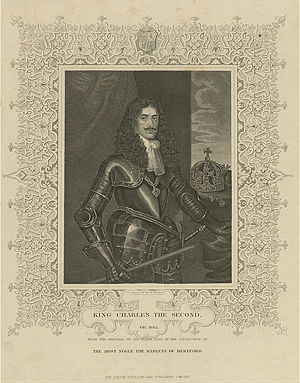 Charles II as king of England. 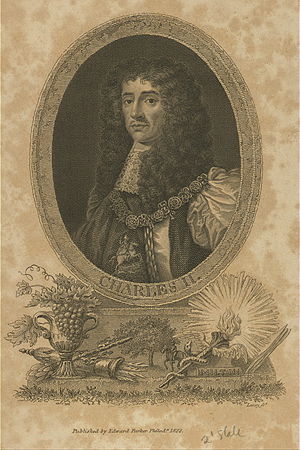 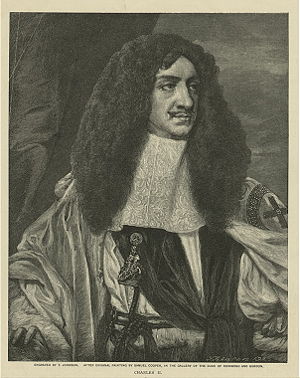 Thom Anderson
The succession box for Scotland shows that the title went to Oliver Cromwell. This is a bit confusing on several levels:

Not to say that WikiPedia is authoritative, but I do see they have a list of Scottish Monarchs that does not list him rather merely lists that there was an interregnum period.

David Martin
John Atkinson He is shown as Brother on this profile above Stuart-4 .

Stuart-5923 and Stuart-4 appear to represent the same person because: Both profiles represent Charles II Stuart, King of England & Scotland and profiles need to be merged.

Shows marriages not on the other profile. So dont merge yet it seems it is his brother and sourced. all is well in the kingdom.

C. Mackinnon
Are mistresses to be treated as spouses? At the moment this makes Catherine Pegge seem to be of more significance than all the others. Charles was only married once, to Catherine of Braganza at Portsmouth, Hampshire on 21 May 1662. [1]
posted Nov 16, 2017 by C. Mackinnon

C. Mackinnon
Are mistresses to be treated as spouses? At the moment this makes Catherine Pegge seem to be of more significance than all the others. Charles was only married once, to Catherine of Braganza at Portsmouth, Hampshire on 21 May 1662. [1]
posted Nov 25, 2016 by C. Mackinnon

Charles II is 17 degrees from Donald Howard, 13 degrees from Julia Howe and 6 degrees from Henry VIII of England on our single family tree. Login to find your connection.