Stump was a navigator aboard the cruiser USS Cincinnati (C-7) and served aboard the gunboat USS Yorktown (PG-1) in the Atlantic during World War I. After the war, he served on the battleship USS Alabama (BB-8). In 1920, he attended flight school at the Naval Air Station Pensacola. He also took up postgraduate instruction in Aeronautical Engineering at the Massachusetts Institute of Technology (MIT). After 1923 he spent two years as Naval Flight Officer in Torpedo Squadron 2 (VT-2) "Doer Birds" based on the carrier USS Langley (CV-1). He was commander of the Cruiser Scouting Wing from 1928 to 1929. He served on the Staff of Commander Cruisers, Scouting Fleet from 1930 to 1931. He later became Commanding Officer of the USS Saratoga's (CV-3) Scout-Bombing Squadron 2 (VSB-2) in 1936, where he served for year. From 1938 to 1939 he served as Navigator on the USS Lexington (CV-2). He was promoted to Commander in 1940 and served as Executive Officer of the USS Enterprise (CV-6).

When World War II began, Stump was Commanding Officer of the USS Langley (CV-1) in Manila Bay, Philippines. He was transferred to the Staff of the Commander in Chief, Asiatic Fleet in January of 1942. While serving there he earned the U.S. Army's Distinguished Service Medal.

He became the first captain of the USS Lexington (CV-16) after her commission in 1943.

In 1944, Stump commanded the Task Unit 52.11.2 and Carrier Division 24 as Rear Admiral. He embarked on the escort carrier USS Corregidor (CVE-58) during operations against Saipan.

After Saipan, Stump was reassigned to Task Unit 77.4.2 (Taffy II). In October 1944, Stump embarked aboard the USS Natoma Bay (CVE-62) headed for Leyte Gulf and Samar. For his services in these battles, he was awarded the Navy Cross. During operation in the Philippines in 1945, the Natoma Bay continued to fly Stump's flag.

In May 1945 he became Chief of Naval Air Technical Training Command and remained at that post until December 1948.

Stump served as Commander of Naval Air Forces Atlantic Fleet from December 1948 to 1951. During this time he was again promoted. This time to Vice Admiral. From Match 1951 to June 1953 he served as Commander, United States Second Fleet.

He was again promoted in 1953, this time to full Admiral. He served as Commander US Pacific Command from July 10, 1953 to his retirement on January 14, 1958. After retiring he served as Vice Chairman of Directors and Chief Executive Officer of Freedoms Foundation at Valley Forge, Pennsylvania.

Felix Stump succumbed to cancer at the age of 78 at Bethesda Naval Hospital in 1972. He is buried in Arlington National Cemetery.

Is Felix your ancestor? Please don't go away!

ask our community of genealogists a question.
Sponsored Search by Ancestry.com
DNA Connections
It may be possible to confirm family relationships with Felix by comparing test results with other carriers of his ancestors' Y-chromosome or mitochondrial DNA. Y-chromosome DNA test-takers in his direct paternal line on WikiTree: It is likely that these autosomal DNA test-takers will share some percentage of DNA with Felix:

Images: 2
Portrait of Felix B. Stump 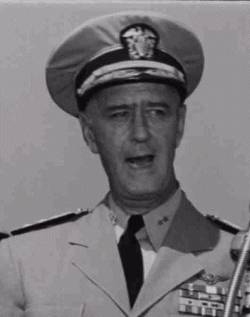 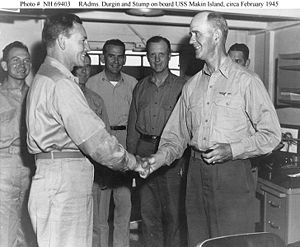 Leave a message for others who see this profile.
There are no comments yet.
Login to post a comment.
Keith McDonald
Hi