LT GEN Sir Vernon Sturdee KBE CB DSO was a senior and decorated Australian Army officer during the Second World War. He had previously served in The Great War at Gallipoli and at the Western Front.

Born Vernon Ashton Hobart Sturdee on 16th April 1890 at Frankston, Victoria, Australia, he was a son of Colonel Alfred Hobart Sturdee CMG and Laura Isabel Merrett.[1] He was a grandson of Captain Frederick Raney Sturdee, Royal Navy. With such a heritage, it is of little wonder that 18-year old Vernon Sturdee joined the Militia in 1908. Vernon married Edith Georgina Robins in 1913 in Victoria.[2]

Vernon Sturdee KBE CB DSO is an Anzac who served in World War One.

He was one of the original Anzacs during the First World War, participating in the landing at Gallipoli on 25th April 1915. He later commanded the 4th Pioneer Battalion and finished the war as a Lieutenant Colonel. Sturdee was awarded the Distinguished Service Order (DSO), mentioned in despatches and appointed an Officer of the Order of the British Empire (OBE) for his leadership roles in the war.

Vernon Sturdee continued to serve in the army between the wars. As threat of further war grew, he was promoted Colonel. He had been a Lieutenant Colonel for 20 years! Sturdee was appointed Commander of the Order of the British Empire (CBE) in the New Year Honours list 1939 for his service on Army Headquarters staff.

A Colonel at the outbreak of the Second World War, Sturdee was promoted to straight to Lieutenant General (bypassing Brigadier and Major General), General Officer Commanding Eastern Command, and responsible for supervising the raising, training and equipping of the new Second Australian Imperial Force units being formed in New South Wales, as well as the now-conscript Militia. He accepted demotion to Major General in July 1940 in order to be appointed General Officer Commanding 8th Division. However, six weeks later he was required to return to Lieutenant General on appointment as Chief of the General Staff. In this role he attempted to defend the islands to the north of Australia as best he could. With only one AIF infantry brigade available, the 23rd, he sent the 2/21st Infantry Battalion to Ambon, the 2/22nd to Rabaul, and the 2/40th Infantry Battalion and 2/2nd Independent Company to Timor. Only the 2/2nd Company was able to hold its region in the face of the far-superior forces of the Japanese. Sturdee urged the Australian government that the 17,800 troops of 6th and 7th Divisions returning from the Middle East, originally bound for Java, be diverted to Australia. When Prime Minister John Curtin backed Sturdee, it brought him into conflict with British Prime Minister Winston Churchill and United States President Franklin D. Roosevelt. in 1942 Sturdee became head of the Australian Military Mission to Washington, D.C., before being appointed General Officer Commanding First Army in New Guinea in 1944–45, where he directed the fighting at Aitape, and on New Britain and Bougainville. Sturdee took the surrender of Japanese forces in the Rabaul area.

Vernon Sturdee succeeded General Sir Thomas Blamey as Commander in Chief of the Australian Military Forces in December 1945 and after the government closed the position to re-instate the Military Board, became Chief of the General Staff a second time in 1946, serving in the post until 1950. In this time, Sturdee developed a structure for the post-war Army that included regular combat formations; forming the Australian Regular Army and laying the foundations for the service as it exists today. He retired on 17th April 1950. In recognition of his services, he was created a Knight Commander of the Order of the British Empire on 1st January 1951.

Sir Vernon Sturdee passed away on 25th May 1966 in the Repatriation General Hospital, Heidelberg, Victoria; being accorded a funeral with full military honours.[3]

Is Vernon your ancestor? Please don't go away!

ask our community of genealogists a question.
Sponsored Search by Ancestry.com
DNA
No known carriers of Vernon's DNA have taken a DNA test. 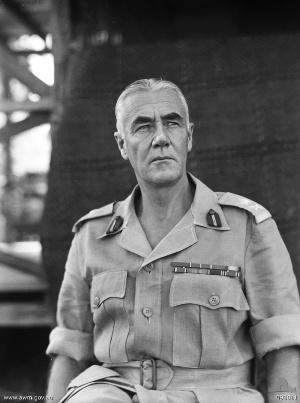