Charles Sturt was an Australian explorer.

Captain Charles Napier Sturt was a British explorer of Australia. He led several expeditions into the interior of the continent, starting from both Sydney and later from Adelaide. His expeditions traced several of the westward-flowing rivers, establishing that they all merged into the Murray River. He was searching to determine if there was an inland sea.

Charles Sturt was born in Bengal British India, the eldest son of Thomas Lenox Napier Sturt, a judge under the British East India Company. When he was five, Charles was sent to relations in England to be educated. In 1810 he was sent to Harrow, as his father was not wealthy and had difficulty finding the money to send him to Cambridge University or to establish him in a profession. His aunt made an appeal to the Prince Regent and, on 9 September 1813, Charles Sturt was gazetted as an ensign with the 39th Dorsetshire Regiment of Foot in the British Army.

Sturt saw action with the Duke of Wellington in the Peninsular War and against the Americans in Canada, returning to Europe a few days after the Battle of Waterloo. Sturt was gazetted lieutenant on 7 April 1823 and promoted captain on 15 December 1825. He escorted convicts aboard the Mariner to New South Wales arriving in Sydney on 23 May 1827.

In Australia Sturt became friendly with John Oxley, Allan Cunningham, Hamilton Hume and other explorers. Sturt wanted to explore the Australian interior, especially its rivers. He found the conditions and climate in New South Wales much better than he expected and he developed a great interest in the country. The Governor of New South Wales, Sir Ralph Darling appointed him major of brigade and military secretary.

On the 4 November 1828 Sturt received approval from Governor Darling to explore the area of the Macquarie River in western New South Wales. The party consisted of Sturt, his servant Joseph Harris, two soldiers and eight convicts. On 27 November Sturt was joined by Hamilton Hume as his first assistant. On 7 December they started out but in 1828–29 it was a period of drought and there was difficulty in getting sufficient water. The courses of the Macquarie, Bogan and Castlereagh rivers had been followed, and though its importance was scarcely sufficiently realized, the Darling River had been discovered. The party returned to Wellington Valley on 21 April 1829. The expedition proved that northern New South Wales was not an inland sea but Charles Sturt wondered where the western flowing rivers of New South Wales went.

In 1829 Governor Darling approved an expedition to solve this mystery. Sturt proposed to travel down the Murrumbidgee River, whose upper reaches had been seen by the Hume and Hovell expedition. In place of Hume, who was unable to join the party George Macleay went. A whaleboat built in sections was carried with them which was assembled, and on 7 January 1830 they started their journey down the Murrimbidgee. In January 1830 they reached the junction of the Murrumbidgee and a much larger river, which Sturt named the Murray River.

Sturt then proceeded down the Murray, until he reached the river's junction with the Darling. Sturt had now proved that all the western-flowing rivers eventually flowed into the Murray. They reached a large lake in February 1830 which Sturt called Lake Alexandrin. A few days later they reached the sea there they made the disappointing discovery that the mouth of the Murray was a maze of lagoons and sandbars. The party then had to row back up the Murray and Murrumbidgee, against the current, in the heat of an Australian summer. Their supplies ran out and when they reached the site of Narrandera in April they were unable to go any further. Sturt sent two men overland in search of supplies and they returned in time to save the party from starving, but Sturt went blind for some months and never fully recovered his health. By the time they arrived back in Sydney they had rowed and sailed nearly 2,900 kilometres of the river system.

For a brief time Sturt served as Commander on Norfolk Island, a convict settlement where mutiny was brewing among the convicts, but in 1832 he had to go to England on sick leave and when he arrived he was almost completely blind. In 1833 he published his Two Expeditions into the Interior of Southern Australia during the years 1828, 1829, 1830 and 1831. Sturt returned to Australia in 1835 to begin farming on his own 5,000 acres (20 km2) of land granted to him by the New South Wales government on Ginninderra Creek near present-day Canberra. In December 1839, Sturt and his wife accompanied George Gawler, Julia Gawler, and Henry Inman on a Murray River expedition, discovering Mount Bryan. Julia Gawler, Charlotte Sturt, and Charlotte's maidservant thereby became the first white women to travel the Murray. Sturt was briefly Registrar-General but he soon proposed a major expedition into the interior of Australia as a way of restoring his reputation in the colony and London.

Sturt wanted to discover a great salt water lake known as the inland sea in the middle of Australia. He also wanted to be the first explorer to reach the centre of Australia. In August 1844 he set out with a party of 15 men, 200 sheep, six drays and a boat to explore north-western New South Wales and to travel into central Australia. They travelled along the Murray River and Darling River and through the future site of Broken Hill but were stranded by the extreme summer conditions near the present site of Milparinka. When the rains eventually came Sturt moved north and established a depot at Fort Grey in today's Sturt National Park. With a small group of men, including explorer John McDouall Stuart as his draughtsman, Sturt travelled across Sturt's Stony Desert and into the Simpson Desert, but he was unable to go further and turned back to the depot. Sturt made a second attempt to reach the centre of Australia, but he developed scurvy in the extreme conditions. Because of his health he was forced to abandon the attempt. John Harris Browne, surgeon on the expedition, assisted Sturt, took over leadership of the party and after travelling 3,000 miles (4,800 km) brought it back to safety.

Early in 1847 Sturt went to England on leave and was presented with the Royal Geographical Society's gold medal. Sturt returned to Adelaide with his family, arriving in August 1849 he was appointed Colonial Secretary with a seat in the council. On 30 December 1851 Sturt resigned his position and was given a pension of £600 a year and settled down on 500 acres (200 ha) of land close to Adelaide and the sea but because of the gold discoveries the cost of living had increased, and on 19 March 1853 Sturt and his family sailed for England. Sturt lived at Cheltenham and devoted himself to the education of his children. In 1855 Sturt applied unsuccessfully for the positions of Governor of Victoria and in 1858 for Governor of Queensland. Sturt's age, uncertain health, and small income all played a part in this.

Sturt's health had been declining and on 16 June 1869 he died suddenly. He was survived by his widow and children. Mrs Sturt was granted a civil list pension of £80 a year, and the queen granted her the title of Lady Sturt as if her husband's nomination to a knighthood of the order of St Michael and St George had been gazetted. Sturt is buried in Cheltenham Cemetery 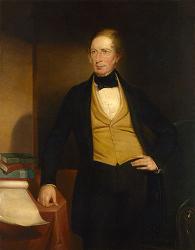 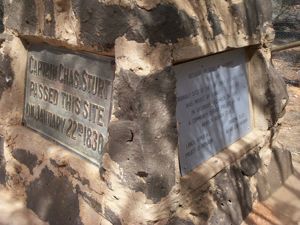 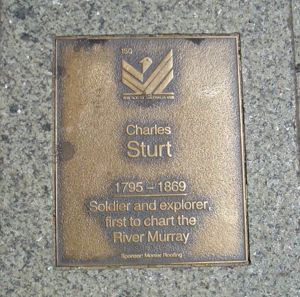 Charles is 20 degrees from Jaki Erdoes, 13 degrees from Wallis Windsor and 11 degrees from Henry VIII of England on our single family tree. Login to find your connection.