Samuel Sturtevant was one of the settlers in Plymouth, Massachusetts, coming to the "New World" about the year 1639/40. No documentation can be found relating to his birthdate, birthplace, his parenthood, or who he specifically married. To build a biography on Samuel, It has necessitated piecing together certain factors (like working a giant jig-saw puzzle) and making assumptions as to what the "picture" looks like.

Various statements have been found - none verified. Discovery of a birth or baptismal record would very likely give a clue to parentage. A query in Hartford Times, June 5, 1954, said "Nottingham, England", but no proofs cited. Holmes "Ancestral Heads", page 231, says Rochester, Kent, England, but this is not found elsewhere and evidently is unproved. Some sources say Holland.

The names of Sturtevant, Sturtivant, Sturdevant, and Sturdivant, are of English origin, and are early nicknames given to pursuivants , harbingers, or heralds. From the Middle English "Sterten"--meaning "to start - plus the Anglo-French "ava(u)nt" - meaning "forward' ... 'away" signifying "start away" for a messenger. Early forms of the name are: Stryrtauant; Stircuant; Stircyuant; and Sturdyvaunte.

Writing in 1913, Walter H. Sturtevant (see Dedication) said that in the early 1600s and later there were Sturtevant families in Nottinghamshire, at Carlton and Norwell - not far from Scrooby, but that it would be pure guesswork to connect Samuel with them, lacking verifying records.

Samuel's parents may have been among the Pilgrims who fled from England to Holland They may have remained there, or have died in one of the epidemics of 1610 1616, etc. They may have returned to England. There are intangible indications that his parents were of good, middle class stock. Possibly with family or other relationships with persons of standing in Puritan circles. The family name "John" might have some important significance. On recording the name of Samuel’s first son, the name Samuel was first written, then crossed out and John interlined in the same handwriting. His sixth child was also named John.

HOW AND FROM WHERE DID SAMUEL COME

There are no proofs or leads in known records. It is an educated guess that he came, possibly, from London, England in his teens, as an apprentice or indenture. Young men of good family often indentured themselves for passage costs, and apprenticeships were a normal educational procedure of the times. Samuel's known record after 1642 makes it seem unlikely that he jumped ship at Plymouth, either from one of the fishing fleet that touched there or from one of the vessels that made this port of call. He was a yeoman, and possibly something of a small trader, but not a mariner.

To add confusion, Samuel's wife, in various records, has been listed as Ann, Anna, and Hannah. Her identity and vital dates, except her 2nd marriage to John Bass, have never been proved. It has been generally "accepted" that Samuel married Ann Lee, daughter of Robert and Mary Lee. Robert Lee was a shoemaker at Plymouth from before January 3, 1636 until after August 6, 1662. As of October 20, 1643. he had two daughters, Ann and Mary (both mentioned that date in the will of John Atwood). John Atwood called the elder Lees "my brother and sister". Daughter Mary Lee became the wife of John Howland, Jr., of Barnstable, Massachusetts.

A court order dated May 3, 1642 settled a case over "corn in partnership' between Mr. John Jenney (Plymouth's miller), Samuel Sturtevant, and Joseph Ramsden. This order indicates that Edward Dotey, not a litigant, had agreed to pay Samuel Sturtevant 13 1/2 bushels for his part of the crop (probably harvested in 1641); that Jenney owed Dotey 5 1/2 bushels "for Thurston Clark"; and that Ramsden owed Dotey 8 bushels. Evidently Sturtevant was in debt to Jenney for the miller got 13 1/2 bushels of the corn and Dotey was "freed from any further incumbrance therein". This court record might indicate that Samuel had come over under an indenture, had planted at Dotey's man, and was to get 13 1/2 bushels of the crop as part of his termination award. This usual final settlement on an indenture at that time was a suit of clothes, 20 acres of land, and 12 bushels of corn. Dotey himself had come on the Mayflower as an indentured servant to Stephen Hopkins. About 1635 Dotey was seeking one or more indentures from London for his service.

The next year Samuel Sturtevant and Joseph Ramsden had John Jenney in court on a trespass action, 20 pounds damage, on June 6, 1643 Ramsden recovered, but apparently Sturtevant got nothing. This action would indicate that Samuel was a free man and a property owner by 1643, and also that he was born earlier than 1624 - the approximate date usually found.

Samuel was listed, at Plymouth, in August 1643, among the males between the ages of 16 and 60 able to bear arms. Under the law of the time he was thus a member of the Plymouth Train Band and did normal military service. There is no record of his having combat duty. He was not listed in the small detachment sent from the colony to the Pequot Wars. After 1645, he was assigned to the north squadron of the Plymouth Company whose emergency assembly point was Jones River.

Samuel's first recorded land purchase was on July 17, 1645 when he bought from John Shaw, Jr. for £4:10:0 (payable in good Beaver before October 31, 1645), 20 acres at High Cliff, Plymouth, bounded south by lands of Samuel Cuthbertson, and north by lands of John Shaw, Sr. By October 26, 1647, he had bought other land from Kanelme Winslow, the amount and location of this yet to be determined.

On December 25, 1655, he was granted by Plymouth Town 4 acres of meadow land on the north side of a branch of Jones River. Five years later the town granted him 50 acres of land on the north side of Jones River on the southeast side of his meadow. This 50 acres he exchanged in July 1667, for 50 acres at the south end of Monponsett Pond abutting 50 acres of Mr. William Bradford's. By grant or purchase he acquired considerable other land, and in his right some grants were made to his widow after his death.

Samuel Sturtevant's dwelling and homelot was at High Cliff (North Plymouth), presumably the 20 acres bought in 1645. This was later occupied by his son John, to whom his other sons sold their rights in this homestead on April 25, 1693.

The following excerpt from a history written by Claire Sturtevant Booth (10-11) best describes Samuel and his wife Ann.

'The whole of Samuel’s Colony life of about twenty-eight years was an active one of founding a home, providing for the needs of his family, extending his lands, farming and serving the community In minor capacities. It is surprising that Samuel found time to serve the community in any way considering the demands made upon his time and strength through the support of his family. In view of this fact, it is evident he was very ambitious and energetic, and possessed of considerable strength and courage. While to none of his public offices can be ascribed any particular greatness, still, each does signify a certain amount of stability and dependability. Had Samuel not been of proven value to the community he would not have been selected by the Governors and their Assistants for the positions to which he was assigned. Such men of strength as William Bradford, Miles Standish, Edward Winslow, Thomas Prince, William Collyer, and Edmond Freeman were active in administering the internal affairs of this Colony and their exemplary conduct to a great measure, influenced Samuel’s life through his association with them. As the years passed over the Colony and Samuel gained the experience of age, he became a respected member of the community and a man of moral worth in the estimation of his associates.

Whoever Ann may have been before her marriage, she proved to be a good wife and mother. Perhaps Samuel was growing as a man of worth In his community before their marriage but It was not until 1647 that his name begins to appear conspicuously in Plymouth records. Ann was undoubtedly a women of intelligence and sensing the force of Samuel’s character, in a way, assisted in directing his perseverance and tenacity of purpose into fields of greater prominence, Samuel did not become a great man in the Colony but he accomplished a great deal in the way of assisting to stabilize the life of the community through his industry and moral conduct. It may readily be taken for granted that unless Ann had been a woman of character, of good family connection, and a real counselor that Samuel would never have progressed to a great degree. The fact that her boys grew to be rugged and stout hearted men would still further prove the value of her character morals. Another indication is that her girls married into good families, the Little's and the Waterman's."

[[1] (Caution as some of the books on line have these few pages torn out of the book.) This one has the correct pages. 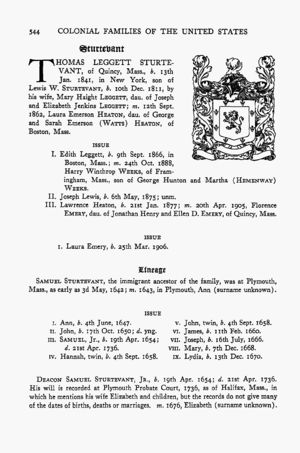 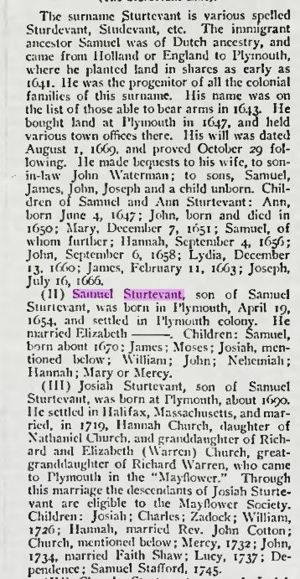 Anne B
This profile clearly states his parents are unknown, yet he has parents attached. Is there a source for this? If not is there an objection to disconnecting? Thank you.
posted Nov 07, 2018 by Anne B

Eloise (Braley) Jeffrey
Samuel is my 8th great grandfather and my family comes down through Georges and Henrys. My grandmother was Edna Sturtevant. Thanks for this info.